Rate of warming seems to be increasing

Staff member
No doubt about it: 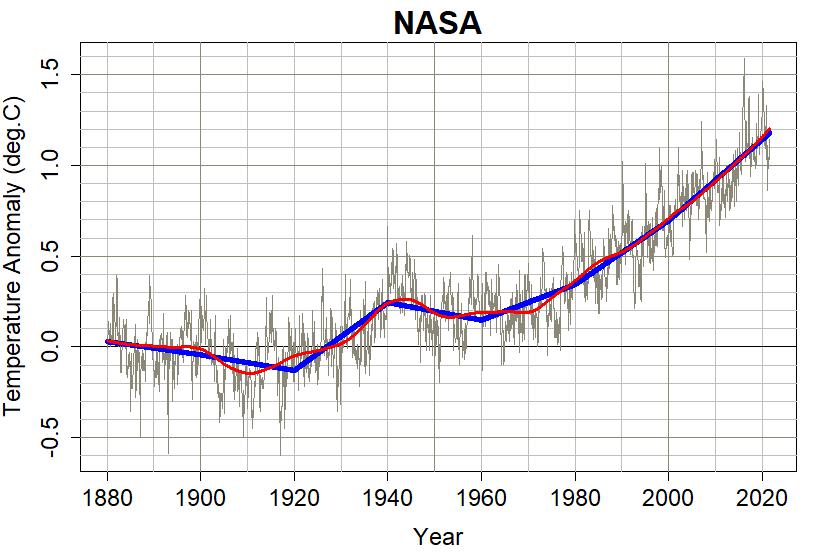 Not only is the globe warming, the rate of warming is increasing: 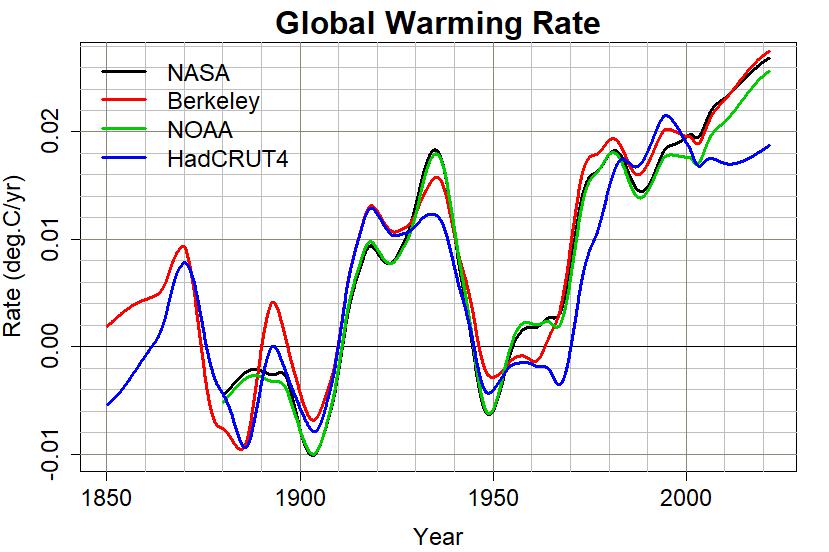 Like the NASA data, the continued increase in the global warming rate itself suggested by data from Berkeley and NOAA doesn’t reach “statistical significance” for the difference between the 1980-2000 rate and post-2000 rate. HadCRUT4 actually suggests a slight decrease, but that too doesn’t achieve statistical significance (not even close).

Bottom line: according to three of the four data sets, there is suggestive but inconclusive evidence that the trend rate itself was higher post-2000 than during the score years 1980-2000, according to HadCRUT4 there’s no such evidence, and according to all four it is possible the trend rate has been constant (at about 0.019°C/year) since 1980.

The reason we can’t be sure of its continued increase is that the noise level is so big; big enough to blur our view of the trend. It would certainly help if we could remove the noise, but if the noise is happening for no apparent reason then it’s futile to try to tell what it is, and what to remove. . . .

For the most recent period, since 1980, we have two additional often-referenced data sets to use. They don’t estimate surface temperature, but “TLT”, atmospheric temperature in the lower troposphere, based on satellite observations of microwave brightness: RSS (from Remote Sensing Systems) and UAH (Univ. of Alabama at Huntsville). I’ll re-set the zero point so they all have average value zero after 1980. I’ll plot yearly averages with different symbols and colors for different data sources, so you have a fair chance to actually tell them apart:
Click to expand... 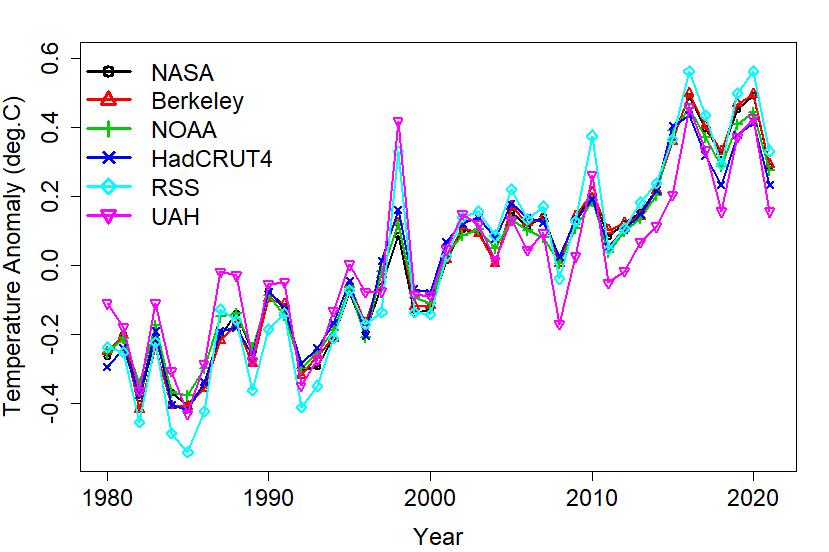 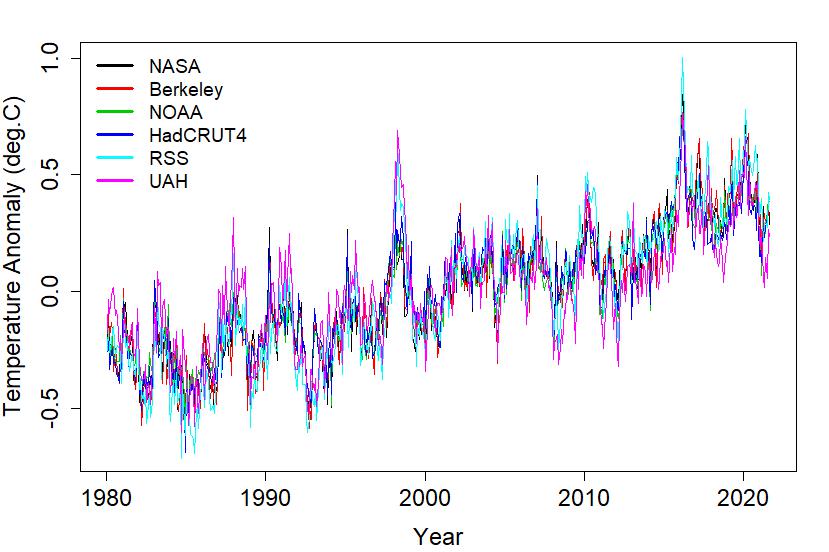 We can remove the known variation (cooling after volcanic eruptions, solar influences, La Nina/El Nino, get a smoother graph: 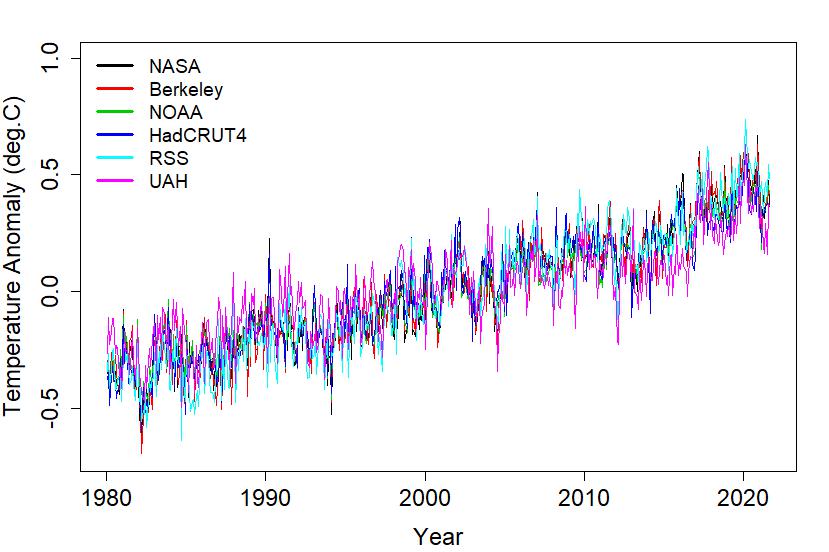 If the rate of warming is accelerating then the future is more bleak than we think.

UAH6 is a worthless series. 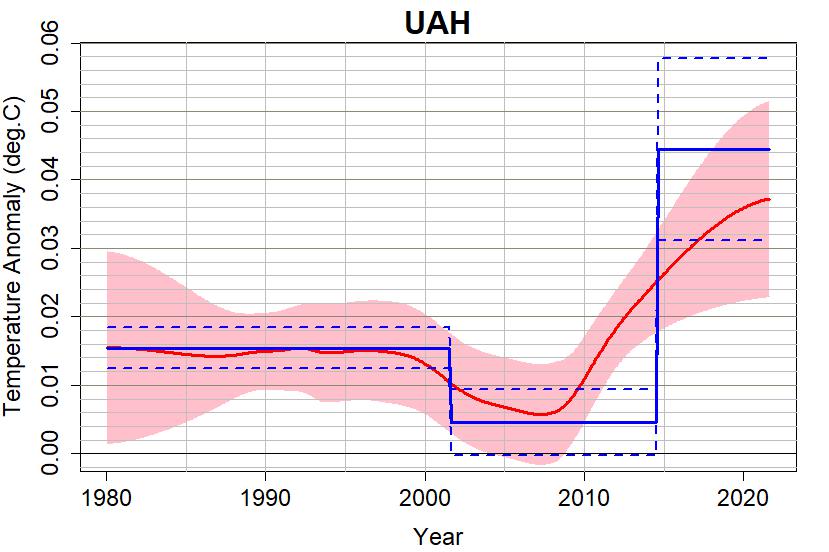 Staff member
Tamino has a new version out.

In the old version above we see HadCRUT4 used and that showed a drop in the rate of warming after 2000. The problem with HadCRUD4 was that it did not cover much of the Arctic. As the Arctic is the fastest warming place on the planet you can see why HadCRUT4 was not a good series. HadCRUT5 is now out, it solves the problem of its Actic coverage.

UAH is a series that is not valid, an outler.