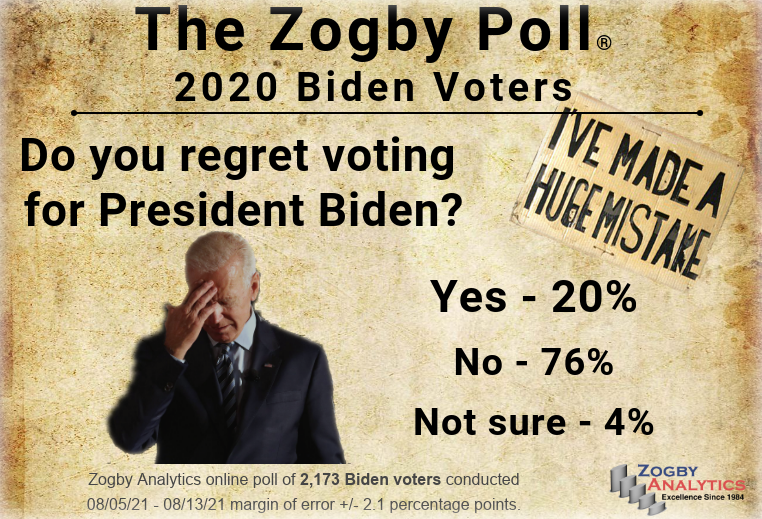 According to the latest Zogby Poll® one-fifth of likely voters regret voting for President Biden. On the surface it doesn't seem like much, especially if you look at the three quarters of likely voters who did not regret their vote; 4% were not sure how they felt.

Why does this matter? If you take into consideration the size of the electorate, and how the last two Presidential elections (2016 and 2020) were decided by tens of thousands of votes in a handful of battleground states, this could really hurt President Biden's chances in 2024. But even though Joe Biden has suffered humiliating defeats in recent weeks, he still has time to recover. One still gets the sense his ship is sinking fast, and he might not have any lifeboats aboard to save him. Biden's low approval numbers, the botched withdrawal of American troops from Afghanistan, and inflation eating away the purchasing power of Americans are the president's biggest problems now.

Where voters lived was also of significance when it came to whether voters' regretted voting for President Biden. Urban voters (28% yes/67% no/4% not sure) were twice as likely to regret voting for Biden than suburban (14% yes/83% no/4%not sure) and rural voters (12% yes/86% no/3%not sure).

What's interesting is our poll was taken before the withdrawal of American troops from Afghanistan. While Biden tries to deal with the aftermath of Hurricane Ida, which blew through Louisiana last week, many Americans are not treating the recent events in Afghanistan lightly. Come next poll, many more voters might be expressing regret if Biden and company do not score a victory soon.......continued
Click to expand...

As has been said before, & surely will be said in days to come, unless he dies suddenly, Biden will go down in history as the very worst in Modern History, & unfortunately for America & the American People, I fear the worst is yet to come.......