Staff member
How is it shaping up? Early successes? Early failures?

The Pacific islands not going with china has to be a big win?

It least our new foreign minister has visited the south pacific.

It's not going to be easy for this government with regards to the cost of living for many looking like it will increase dramatically. I wish them all the very best.

Staff member
Cancel the tax cuts to the upper 10%, boost pensions and the dole, ease some of the conditions—5 job ads a week is enough surely? Need to do 20 and how can you do a proper application.

HBS Guy said:
Cancel the tax cuts to the upper 10%, boost pensions and the dole, ease some of the conditions—5 job ads a week is enough surely? Need to do 20 and how can you do a proper application.
Click to expand...

also provide assistance for people and their families to move to where the jobs are.

Staff member
Yeah—FFS recognise that there are people that work seasonally—don’t make it three weeks of paper warfare to accept some people will only work a few hours a week for the same part of the year each year.
Last edited: Jun 11, 2022

Staff member
Glad to hear that some of the less savory labor market practices will be tackled by the Labor government!

Staff member
So—what do people think so far about the new Labor government?

Pity there is no direction about COVID19!

Staff member
Covid19 will NOT be the last zoonotic pandemic we will experience:

We have seen SARS-COV-2 cause thousands and thousands of deaths and now monkeypox (close relation to small pix) is emerging. Will there be another zoonotic pandemic?

As AGW sees animals migrate to areas now warm enough for them they bring their zoonotic diseases.

Zoonotic diseases are infectious diseases that can pass from animals to humans. Seventy-five per cent of new human diseases are zoonotic.

Some zoonotic diseases, such as Hydatids, Anthrax, Hendra virus infection, Avian influenza or Rabies can be very serious in humans and may cause fatalities
Click to expand...

SARS-COV-2 (Covid19) is a zoonotic disease as was the Spanish Flu—both diseases that arose from wet markets, one in Wuhan Province, China, the other from a wet market in Alabama or Arkansas.

As Animals Migrate Because of Climate Change, Thousands of New Viruses Will Hop From Wildlife to Humans—and Mitigation Won’t Stop Them

“We can’t put this one back in the bottle,” said the researcher behind a recent study about the spread of zoonotic diseases.
Click to expand...

Takes a lot of time to remove CO2 from the atmosphere—as we do the partial pressure of CO2 decreases and so more CO2 leaves the oceans for the atmosphere. So the globe will keep warming at the rate of 0.2°C per decade for quite some time.

“We know that species are on the move—we know that probably has relevance to other viruses,” said Carlson, an assistant professor of biology at Georgetown University. “And for a while, we really wanted to get into what does that mean for human health? What does it mean for pandemics?”

What it meant, Carlson and his co-authors found, was that it may already be too late to limit the spread of zoonotic spillover—when diseases move from animals to humans—because of climate change.

Over the next 50 years, the spread of pathogens between humans and animals in the wild will lead to the transmission of about 4,000 new viruses between species, their research found, and increase the risk of global pandemics. . . .

In recent weeks, the epidemiological world has been focused on a global uptick in cases of monkeypox. Discovered in the 1950s, the virus that causes monkeypox—which was first identified in research primates—is in the same epidemiological family as smallpox. The virus is common in parts of Africa, is spread through close contact and it is treated using antiviral medicines. The smallpox vaccine is also effective in treating monkeypox.

While public health officials say that it has little chance of becoming a pandemic, the world will increasingly have to contend with monkeypox and as-yet undiscovered diseases like it as the destruction of natural habitats—a driver of climate change—brings humans and wild animals in closer contact, according to Carlson’s team.
Click to expand... 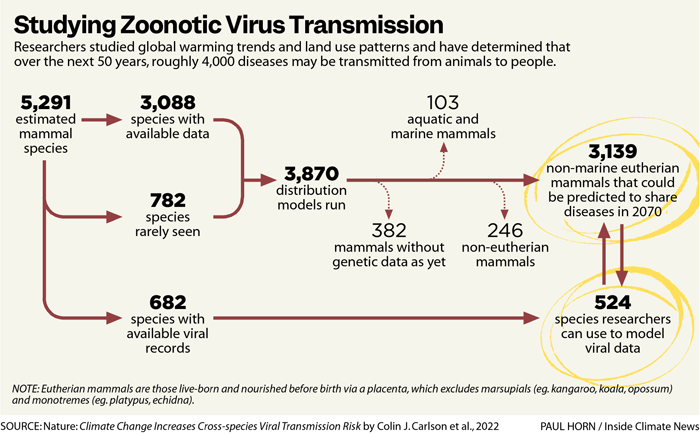 One of the most surprising findings of the study, Carlson said, is not just that mitigation doesn’t keep this from happening, but that “a lot of this has probably already happened because we live in a world that’s one degree warmer.”

“We are going to just have to deal with the fact that climate change, as a choice that we’ve already made to some degree, means higher pandemic risk,” he said.

In the study, he and his colleagues wrote: “Whereas most studies agree that climate change mitigation through reducing greenhouse gas emissions will prevent extinctions and minimize harmful ecosystem impacts, our results suggest that mitigation alone cannot reduce the likelihood of climate-driven viral sharing. Instead, the mildest scenarios for global warming appear likely to produce at least as much or even more cross-species viral transmission.”

And there may be more than 4,000 viruses that are shared.

Carlson said in the study they counted the number of times two species that have never met shared viruses for the first time. He said “that could be one virus or it could be all of their viruses.”

“Rather, our results highlight the urgency of better wildlife disease surveillance systems and public health infrastructure as a form of climate change adaptation, even if mitigation efforts are successful,” the study said.
Click to expand...


So if we don’t act on AGW animals will keep moving to new areas either because their habitat is razed (deforestation which also leads to desertification) or new areas are now warm enough for them. And the animals carry their diseases with them and due to close contact with humans their viruses jump to our species. Covid19 is just the beginning!
Last edited: Jun 16, 2022
S