"Kansas voters have protected abortion rights by rejecting a measure that would have allowed the Republican-controlled Legislature to tighten abortion restrictions or ban it outright.

The referendum in the conservative state was the first test of US voter sentiment about abortion rights since the Supreme Court overturned Roe v Wade in June.

It was a major victory for abortion rights advocates following weeks in which many states in the South and Midwest largely banned abortion.
Voters rejected a proposed amendment to the Kansas Constitution that would have added language stating that it does not grant the right to abortion...." Rolling coverage of the international stories of interest to our readers 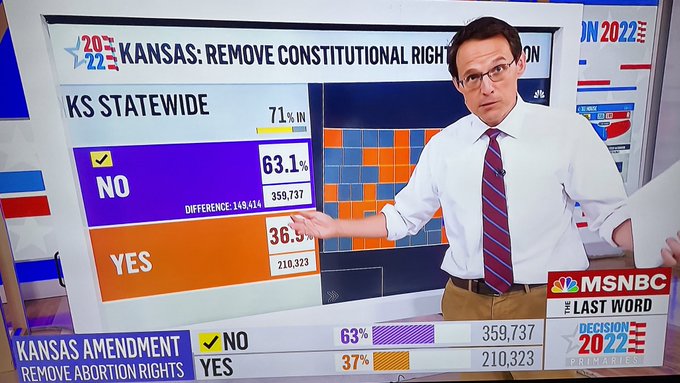 The right want to impose their values on an unwilling society. Like the Taliban do

And gives the lie that Americans do not want abortion rights!

Anecdotally, it felt like finally Republicans had gone too far. On Instagram, even my nonpolitical friends seemed furious. Friends of friends called me. Democrats raised 80 million dollars in the week after the Dobbs decision was handed down. Protests raged from California to Atlanta. Women in Kansas turned that rage into action and registered to vote — in large numbers. According to TargetSmart, “70 % of Kansans who registered to vote after the Dobbs decision was released were women.”
Click to expand...

I said the moment this hit that the far right had again over estimated how big their 'silent majority' is. Trump and this? They are finished

Staff member
Completely unsurprising to me. Polls consistently show that the majority of Americans want some access to abortion.