ScoMo knows as much about international politics as he does about Australian bushfires, zero.

Australia is very dependent on trade with China. To offload elsewhere the goods that China rejects or no longer want will mean either lower prices or more transport costs or both.

Australia opened the current relationship with China in 1973 and knew everything it needed to know about China and its human rights record.

Sadly for Australia, the USA will be keen to pick up all the trade that Australia loses with China and that might suit China and the USA very well.

The USA will have no sympathy for Australia's trade loss if the USA gains.


Why you can trust SCMP
TOP PICKS


US-China Relations
Obama: ‘I could not have a trade war’ with China due to financial crisis
17 Nov 2020 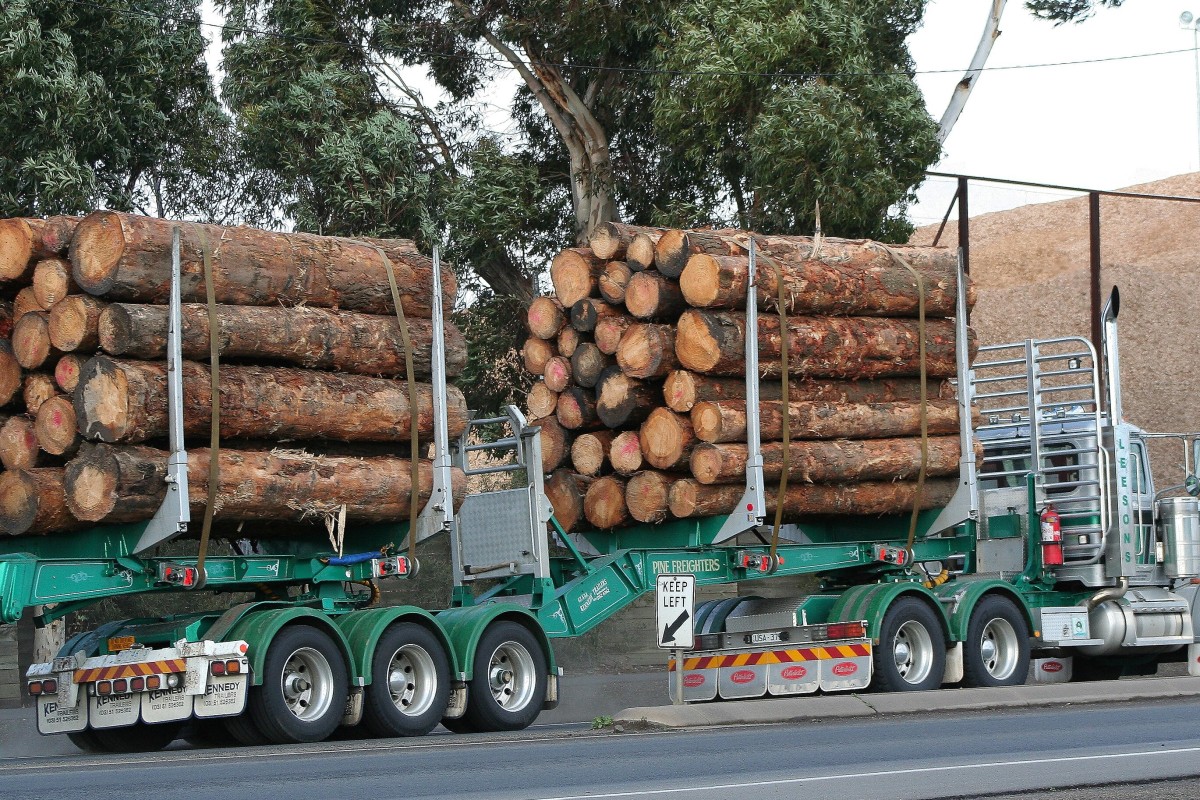 Last week, importers in China were verbally advised to avoid purchases of seven Australian products, including log timber, as tensions between the two countries increased. Photo: Shutterstock
China has labelled Australia’s perceived interference in its domestic affairs as “crude”, saying its meddling and disrespect for Chinese sovereignty has damaged the bilateral relations between the two countries, a day after it banned imports of logs from a second Australian state.
Providing more insight into the Chinese government’s position on the conflict that has
escalated over the last seven months,
Chinese foreign ministry spokesman Wang Wenbin on Thursday said Australia’s excessive public criticisms of political issues in Xinjiang, Taiwan and Hong Kong, and its constant slander of China without evidence, had “poisoned” the relationship.

These actions have severely damaged mutual trust between the two countries, poisoned bilateral relations, and undermined the principles of Sino-Australian cooperationWang Wenbin

“The reasons for the difficult relationship between China and Australia are very clear. For some time now, Australia has been blatantly violating usual diplomatic practises in international relations and has made inflammatory comments on China’s domestic matters relating to Hong Kong, Xinjiang, and Taiwan repeatedly,” Wang said.


“Some people in Australia have slandered, accused China, and politicised the relationship without evidence.

“These actions have severely damaged mutual trust between the two countries, poisoned bilateral relations, and undermined the principles of Sino-Australian cooperation.”

Wang, in the daily foreign ministry press conference, also urged Australia to “face up” to these issues – which have had a hand in breaking down the communication between the two countries – and asked Australia to treat China fairly and respectfully as a means to put a halt to the conflict.
What has happened over the last seven months between China and Australia?
12 Nov 2020

An example of the alleged interference emerged on Thursday, when the Chinese embassy in Sydney slammed Australian Minister for Foreign Affairs Marise Payne for criticising Beijing’s disqualification of four
lawmakers in Hong Kong,
telling Australia not to meddle in China’s affairs and to observe the “norms of international relations”.

Earlier on Thursday, the Australian government and industry body for log timber, the Australian Forest Products Association (AFPA), said the state of Victoria had been banned from shipping logs to China from Wednesday due to the discovery of a pest, the bark beetle Ips grandicollis, in some imports.
The Chinese foreign ministry confirmed on Thursday that Chinese customs had detected the same pest in the Victorian logs as it had in
logs from Queensland in late October.
“These pests pose a serious threat to China’s agricultural production and ecological security,” Wang said, adding that the actions are precautions in line with international biosecurity practises, many of which are also found in Australia.


China-Australia trade: Beijing set to ban nearly US$400 million worth of Australian wheat imports
The Victorian ban comes just over a week after China unleashed a fresh wave of trade actions against Australia which included the ban on Queensland logs and the suspension of barley imports from Australian grain exporter Emerald Grain due to contamination.

Chinese importers were also warned to avoid buying
seven categories of Australian goods,
namely barley, coal, cotton, sugar, copper, wine and log timber, some of which were already the subject of existing trade actions.
China had already discouraged the imports of Australian cotton and coal, while it is continuing to investigate claims of dumping cheap Australian wine in China.
Over the past week, China has started to speak about its conflict with Australia, adding that Australia’s departure from a genuine free and open trade relationship – stemming from its free trade agreement signed in December 2015 – was another reason the relationship had soured.

At a press conference last Friday,
Chinese foreign ministry spokesman Wang
said that since 2018, a number of Chinese investment projects have been rejected by Australia due to “ambiguous and unfounded ‘national security concerns’” and that 106 anti-dumping and anti-subsidy investigations had been made against China, compared to only four such investigations raised by China against Australia.

Australia’s Department for Foreign Affairs and Trade did not respond directly to a request for comment in response to Wang’s remarks last week, instead opting to point to recent comments made by trade minister Simon Birmingham.
Birmingham himself also did not respond directly to Wang’s earlier comments, but maintained he had not received confirmation from Chinese authorities that any Australian imports had been formally banned from China.

He also said most shipments to China were still being processed despite the trade actions, but conceded there were delays in the customs clearance of live lobsters.

In the past week, a handful of shipments of Australian cherries also met with delays, mainly at Shanghai airport, but the problem was not widespread and could likely be due to escalated coronavirus inspections for packaging contamination, import sources said.

China has taken coronavirus testing of food packaging seriously since the virus was found on imported shrimp in July. It has not only stepped up customs inspections as part of its biosecurity risk management, but has also banned several seafood export countries.
It has also banned imports from 54 meat processing plants globally due to the risk of coronavirus contamination concerns, including two in Australia.

The two Australian meat processing plants join four other plants that had their
beef exports suspended
due to mislabelling issues in May, just as tensions between the two countries started to escalate.
Why has the China-Australia relationship deteriorated into ‘trade war 2.0’?
20 Oct 2020

Relations between the two countries have been strained since Canberra pushed in April for an international inquiry into the
origins of the coronavirus,
although cracks in the relationship had appeared long before, especially after Canberra banned China’s Huawei Technologies Co. from helping build its
5G telecommunications network
two years ago.
China made it clear in August during a speech by Chinese deputy head of mission Wang Xining in Canberra it was upset by Australia’s push for the inquiry.
Australia Prime Minister Scott Morrison wrote to Group of 20 leaders to galvanise support for the probe without consulting China, just as evidence emerged Chinese authorities had initially covered up the existence of the virus.

After Donald Trump was elected the US president, some Australian media regularly pursued stories about alleged increases in Chinese spying, suggesting Chinese spies and spying activities had increased, again drawing the ire of Beijing.
This also came at a time when Chinese economic expansion into Australia and many other Western economies – both in terms of investment in assets as well as property development – was booming.
Australia has since implemented its own foreign interference national security law and last week charged an Australian man with Vietnamese-Chinese heritage under the law for the first time.
Click to expand...

I think the PM is looney-tunes.. on this issue.

A person so out of his depth all he can do is bluff and bluster. He is an appalling PM. Useless as a 2 bob watch.

easy stop Chinese imports with any of these items... It is a 2 way street, then support our manufacturing industry and start making our own.....
I'm dreaming I know.....

pinkeye said:
I think the PM is looney-tunes.. on this issue.

A person so out of his depth all he can do is bluff and bluster. He is an appalling PM. Useless as a 2 bob watch.
Click to expand...

what do you think he should do differently Pinkie or can you only winge ?

easy stop Chinese imports with any of these items... It is a 2 way street, then support our manufacturing industry and start making our own.....
I'm dreaming I know.....
Click to expand...

You can travel to your Shangri-la in your fantasy Australian-made car.

Staff member
Industry can be built here. This hollowing out of the economy started under and encouraged by John Fucking Howard needs to stop and be reversed,

HBS Guy said:
Industry can be built here. This hollowing out of the economy started under and encouraged by John Fucking Howard needs to stop and be reversed,
Click to expand...

you mean the recession we had to have... ohh wait who did that ?????
who couldn't handle all the small business's being successful and the union getting nothing and had to destroy it.... who was the PM before Howard, name like a silent film star......

DonDeeHippy said:
you mean the recession we had to have.
Click to expand...

in order to fix up the mess left by Fraser, certainly . His reforms gave us over 25 yrs of growth. . He should be made a knight.

Staff member
Hollowing out the economy = firms leaving here to set up production in China.

That was what Howard did. He , and his party, continues to lay waste to the Australia that existed BEFORE HOWARD's last reign. Dirty nasty lying creep... who could apparently convince smart people to do really bad things for AUSTRALIA.

I was young adult when Whitlam was dismissed... never been interested before.. but even I could see the writing on the WALL. Howard hammered in ALL the nails. An utter despicable liar. No doubt like many good liars, he grew to believe HIMSELF..

We still have his dregs hanging around causing problems... Dutton for one.

We are as rotten to the core in our liberals, as the US is in their right wing. Is there a real correlation..? they don't seem to have anything like a Labor Party.
So the workers all get f u t a.
C

as the US is in their right wing. Is there a real correlation..? they don't seem to have anything like a Labor Party.

Bernie Sanders would be closest thing to the Labor party but the Americans think he’s a Communist.

Chuck said:
Bernie Sanders would be closest thing to the Labor party but the Americans think he’s a Communist.
Click to expand...