A 24-year-old nuclear-fusion record has crumbled. Scientists at the Joint European Torus (JET) near Oxford, UK, announced on 9 February that they had generated the highest-ever sustained energy from fusing together atoms, more than doubling their own record from experiments performed in 1997. . . .

But so far no experiment has generated more energy out than it puts in. JET’s results do not change that, but they suggest that a follow-up fusion reactor project that uses the same technology and fuel mix — the ambitious US$22-billion ITER, scheduled to begin fusion experiments in 2025 — should eventually be able to achieve this goal. . . .

To break the energy record, JET used a tritium fuel mix, the same one that will power ITER, which is being built in southern France. Tritium is a rare and radioactive isotope of hydrogen that, when fusing with deuterium, produces many more neutrons than do deuterium reactions alone. That ramps up the energy output, but using this fuel required JET to undergo more than two years of renovation to prepare the machine for the onslaught. Tritium was last used by a tokamak fusion experiment when JET set the previous fusion energy record in 1997. . . .

In an experiment on 21 December 2021, JET’s tokamak produced 59 megajoules of energy over a fusion ‘pulse’ of five seconds, more than double the 21.7 megajoules released in 1997 over around four seconds. Although the 1997 experiment still retains the record for ‘peak power’, it was over a fraction of a second and its average power then was less than half that of today, says Fernanda Rimini, a plasma scientist at the CCFE who oversaw the latest experimental campaign. The improvement took 20 years of experimental optimization, as well as hardware upgrades that included replacing the tokamak’s inner wall to waste less fuel, she says.

Power ratio
Producing the energy over a number of seconds is essential for understanding the heating, cooling and movement happening inside the plasma that will be crucial to run ITER, says Rimini.

Five seconds “is a big deal”, adds Proll, who works on an alternative fusion-reactor design called a stellarator. “It is really, really impressive.”

Last year, the US Department of Energy’s National Ignition Facility set a different fusion record — it used laser technology to produce the highest fusion power output relative to power in, a value called Q. The facility produced a Q of 0.7, where 1 would be breakeven — a landmark for laser fusion that beat JET’s 1997 record. But the event was short lived, producing just 1.9 megajoules over less than 4 billionths of a second.

JET’s latest experiment sustained a Q value of 0.33 for five seconds, says Rimini. At one-tenth of the volume, JET is a scaled-down version of ITER — a bathtub compared to a swimming pool, says Proll, and because it loses heat more easily it was never expected to hit breakeven. If engineers applied the same conditions and physics approach to ITER, she says, it would probably reach its goal of a Q of 10, producing ten times the energy put in.
Click to expand...

This does look very promising. Fusion is my hope for reducing and eventually ending AGW. No need to mine, no need to burn crap. Dunno how they will scale down—could every house/apartment block have its own fusion reactor creating power for that house/block? Imagine—no more power poles in cities, no ugly thick cables, transformers etc!

Going down further—what about a car with its own fusion reactor? Put in a litre of ultra distilled water—will run that car for its lifetime!

This video below will show that it's false hope:

In my opinion -
Fusion is a waste of money -
if they would have put a fraction of that money into molten salt Thorium reactors
we would have had viable power stations 30 years ago.
They would be safe, cheap and have unlimited power for the next 100,000 years.
We would enter a new Thorium age and never go back to coal.

Staff member
It is getting closer.

HBS Guy said:
It is getting closer.
Click to expand...

Not really.
A normal nuclear reactor has the following temperatures:


However a fusion reactor produces 350 million degrees Celsius.
It is not possible to have materials that can withstand those temperatures.
If you read below you'll see
that the machine was already badly damaged
after having only a 5 second reaction time. 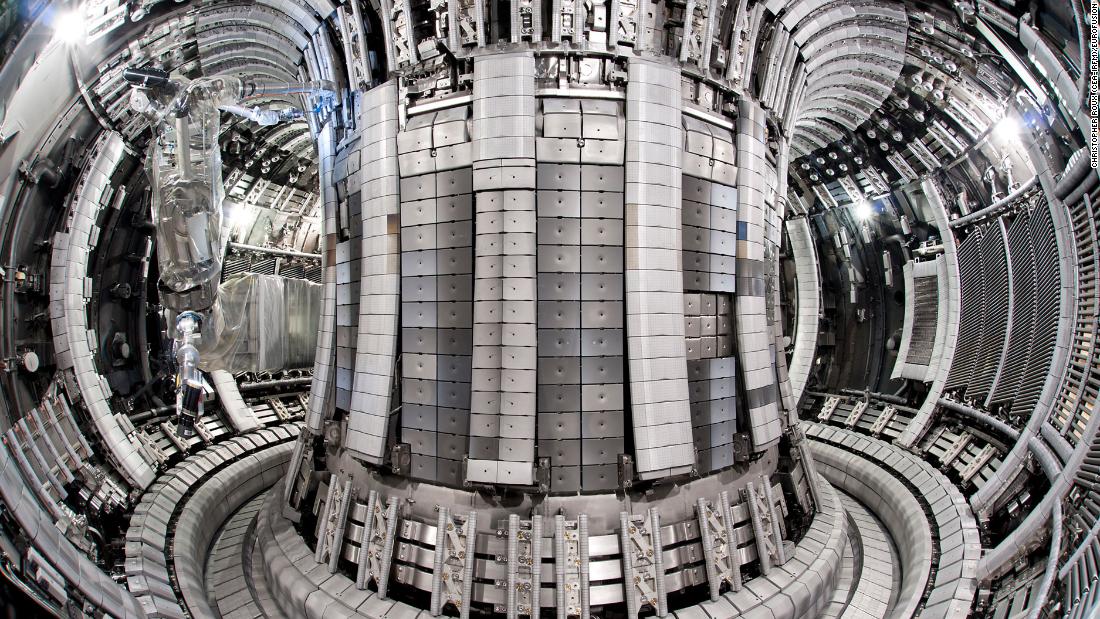 Scientists working in the UK announced that they more than doubled the previous record for generating and sustaining nuclear fusion, the same process that allows the sun and stars to shine so brightly.

The tokamak in Oxford, called the Joint European Torus (JET), has been subject to such extreme heat and pressure that this experiment
is likely the last it will cope with.

In a giant donut-shaped machine known as a tokamak, scientists working in the English village of Culham, near Oxford, were able to generate a record-breaking 59 megajoules of sustained fusion energy over five seconds on December 21 last year. Five seconds is the limit the machine can sustain the power before its magnets overheat.

Staff member
Yeah, they need stronger magnetic fields to keep the plasma from the walls.

HBS Guy said:
Yeah, they need stronger magnetic fields to keep the plasma from the walls.
Click to expand...

I doubt it.
The answer is Thorium.
I reckon it's political.
We could have had cheap unlimited power 40 years ago
as a molten salt reactor was proven to work.
There are problems -
the Thorium has to be continuously chemically purified
otherwise the reaction stops.
China and India are working 24 hours a day on it.

It would have put all the: oil, gas and coal companies out of business
as the cost of Thorium power would
be only 2 cents per kilowatt hour.

Staff member
Thorium doesn’t create plutonium, apart from that it is as bad as uranium tho.

HBS Guy said:
Thorium doesn’t create plutonium, apart from that it is as bad as uranium tho.
Click to expand...

No it's not -
it creates 1000 times less nuclear waste than Uranium reactors.
It can even eat up nuclear waste for breakfast.
Waste can be added to the molten salt mix and energy
made out of it.
You must log in or register to reply here.
Share:
Facebook Twitter Reddit Pinterest Tumblr WhatsApp Email Link
Top
Rules and regulations