I was in Canada in 1991 when a black motorist was shot by Canadian police because the cop who shot him claimed he looked like a wanted man. The picture of the two demonstrated the only thing in common between the victim and the wanted man was the color of his skin.

A few years ago the Canadian police tasered to death a Polish man at an airport over some sort of misunderstanding over language. An investigation criticized the cops for their unjustified conduct. 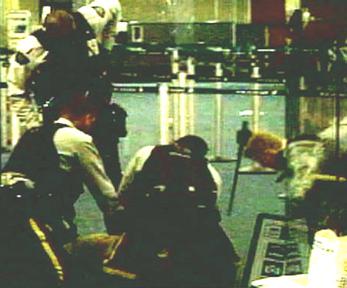 I personally had a confrontation with an armed Canadian copper at Calgary airport in 2008 when I attended an immigration office to retrieve an Australian passport which they had retained several days previously for the purpose of entering a visa stamp into the passport. I knocked loudly several times on the door of the office, which was locked, and an armed cop opened it and told me to piss off. I told him loudly I had an appointment to collect my passport and I am not pissing off and we had a verbal confrontation. Another official then intervened and retrieved and handed me my passport which had been stamped with a visa.

Selwyn Romilly was a judge on British Columbia's Supreme Court.Peter A. Allard School of Law/YouTube

One person killed in shooting at Vancouver airport

The Vancouver police department has been left red-faced and apologizing profusely after officers, looking for an assault suspect deemed to be 40 to 50 years old, slapped cuffs and detained an 81-year-old black man … who turned out to be a former judge for British Columbia’s Supreme Court.
Selwyn Romilly was taking his morning walk around Stanley Park on Friday when he was stopped by five white officers.
“They said that they got a complaint about someone fitting my description, and before I could say anything, they told me to put my hands behind my back and they shackled me with handcuffs,” Romilly told CBC News.
“I have no gun, I don’t have anything in my hand or my person. And here you have — at 9:45 a.m., near to Third Beach where you have lots of people — you have a black guy … shackled in handcuffs and people passing by. I found that most embarrassing.”
Police arrested Selwyn Romilly when they said he fit the description of an assault suspect.UBC Allard School of Law
After Romilly told the officers he was a retired judge, they released him from the handcuffs “after about a minute.”
“You would think that we’re past that stage in Canada,” Romilly said of the arrest.
Vancouver Police Department spokesperson Sgt. Steve Addison told the CBC officers were responding to several 911 calls about a man assaulting strangers on the seawall near English Bay. The suspect was said to be walking normally, but then he would suddenly start kicking, punching and spitting at people.
In reality, retired Supreme Court Judge Selwyn Romilly is about 40 years older than the suspect.YouTube
“Officers observed a man who resembled the description of the suspect and briefly detained him to investigate. Given the violent nature of the incident, the man was handcuffed,” Addison wrote.
However, Addison confirmed that the description given for the suspect was “a dark-skinned man, 40–50 years old, wearing a red top.”
Two officers have personally apologized to Selwyn Romilly.Shutterstock/Margarita Young
The correct suspect was later found.
Romilly said two senior officers have reached out to apologize, and he doesn’t plan to file a complaint, but hopes the police department makes some changes.
Selwyn Romilly said he will not file any complaints against the Vancouver police.Peter A. Allard School of Law/YouTube
“They have to be very vigilant when they train young white police officers for dealing with minorities,” Romilly said. “I hate to say that this is a case where I was targeted because I was walking while Black, but you kind of wonder why those handcuffs were placed on me at such an early stage.”
Click to expand...