The long term outlook for the reef had deteriorated from 'poor to very poor', the draft decision says, but the government is strongly opposed to the recommended move.


Australia will contest a draft recommendation to list the Great Barrier Reef as a world heritage site "in danger" after United Nations body called for more government action on climate change.

Federal Environment Minister Sussan Ley says the government was "blindsided" by the report by UNESCO's World Heritage Committee, which cited successive reef bleaching events as being of particular concern.

The long term outlook for the reef had deteriorated from "poor to very poor", the draft decision says, but the government strongly opposes the move which could put its world heritage status at risk, impacting tourism and other ventures.

"This is a complete subversion of normal process," Ms Ley told journalists on Tuesday, describing the government's strong disappointment and bewilderment at the decision.

She agreed climate change was the biggest threat to the reef but said Australia had the best reef management practices in the world.

Australia's views on the draft decision were made "very clear" to the Director General of UNESCO by Ms Ley and Foreign Minister Marise Payne during a phone call on Monday night.

"Countries, including European countries, have got strong views about what policies different countries should have on climate change ... but this is not the convention in which to have those conversations," she said.

"This decision was made without due process. It was made on the basis of a desktop review. It hasn't even used the latest data.

"Clearly there were politics behind it. Clearly,

those politics have subverted a proper process and for the World Heritage Committee to not even foreshadow this listing is, I think, appalling."

The UNESCO recommendation means it's critical for countries, including Australia, to limit global temperature increases to 1.5 degrees, the World Wide Fund for Nature's head of oceans in Australia, Richard Leck, said.

"Clearly, the significant coral mortality has prompted UNESCO to urge the Australian government to do more on climate," he said.

Ms Ley said the government would challenge the decision when it comes up for final consideration in July.

China is being blamed for a proposal by The World Heritage Committee, which sits under UNESCO, to move the Great Barrier Reef to the ‘endangered’ list because of the impact of climate change

Environment Minister Sussan Ley says Australia has been “blindsided” the recommendation, suggesting the decision was politically motivated, because everyone is picking on us for no reason – and it has nothing to do with the thousands of scientists who have been banging their heads against the wall for nearly a decade while trying to explain to our government that rapidly burning fossil fuels at such an accelerating rate is not very good for the 90% of the world’s sea species that live alongside our heavily mined and drilled North Queensland coastline.

Ms Ley described the decision as a “backflip” and they had not received the necessary consultation leading up to it.

“It is a deviation from normal process.” she said.

The World Heritage Committee will consider the decision at a meeting in China, next month.

The mere mention of the word ‘China’ has provided the Federal Government a scapegoat for this embarrassing turn of events – as they ramp up there tit-for-tat tensions with the world’s leading economy and our biggest trading partner in an effort to impress the redneck commentators in the Australian media.

Marine scientists say the climate change denying government should not be surprised by this ruling, following countless of independent studies surrounding the bleaching of two-thirds of the corals in the northern part of the Great Barrier Reef, which have died in the reef’s worst-ever bleaching events that have been taking place over the last decade.

For many years before this announcement the Barrier Reef had already been visibly affected by rising ocean temperatures, and the environmental vandalism of careless spill offs from nearby industries that have caused the fragile ecosystem to nearly collapse.

However, local tourism operators, who have already been crushed by a pandemic that refuses to fuck off due to our governments inability to order enough vaccines or quarantine properly – insist that they’ve been seeing heaps of fish and shit out there on their boats… and please don’t stop visiting.

One Nation leader Pauline Hanson has criticised a campaign to stop the bleaching of Australia’s Great Barrier Reef, saying it is time to accept that the experimentation with colour hasn’t worked.

“Australians are sick and tired of all these different colours taking over our reef. Well enough’s enough. This is Australia. This is our culture. And if you want to be part of our reef then you need to adopt our colour, which is white,” Ms Hanson said.

The One Nation leader, said she wasn’t surprised the reef was now split into white and coloured areas. “The coloured coral simply refuse to integrate”.

Staff member
I knew the GBR was in grave danger years ago. The govt is bullshitting because it doesn’t want to take action on AGW.

I just cannot understand this. GBR is endangered, without any doubt, and there is no will to try to do anything about it apparently.

In the WPB. The waste paper bin.

The 'Too Hard ' basket. We have mentally ill people running the country.

I wrote a university assignment about the carmichael coal mine and rail project in 2015! and how concerned UNESCO was about the reef...... as mothra said..... blindsided my arse!

Great Barrier Reef: Labor calls on Sussan Ley to back up claim Unesco bowed to political pressure
Evidence the reef is in trouble has been building for years, federal opposition environment spokesperson Terri Butler says. . . .

Guardian Australia revealed on Wednesday that Dr Fanny Douvere, of Unesco’s World Heritage Centre in Paris, had rejected a suggestion by the environment minister, Sussan Ley, that the body told the Australian government a week ago it would not be recommending the reef be moved to the “in danger” list.

Douvere was responding to Ley accusing Unesco of a “complete subversion of normal process” and promising the government would fight the recommendation.

Labor’s environment spokeswoman, Terri Butler, said the government should “explain the basis of its claims of interference given the warning signs”.
Click to expand...

Five of the world’s leading reef and climate scientists have thanked Unesco for recommending the Great Barrier Reef be listed as world heritage “in danger”, saying it was the right decision in part because Australia had not “pulled its weight” in reducing emissions.

The group of scientists, including the Australian professors Ove Hoegh-Guldberg and Terry Hughes, wrote to the UN body on Thursday saying the recommendation to downgrade the 2,300-km reef system’s world heritage status was “the right decision”.

The Morrison government has accused Unesco of “blindsiding” it and indicated it would undertake a lobbying campaign before the 21-member world heritage committee considers the recommendation at a meeting in China starting on 16 July.
Click to expand...

Should call Scummo Hyacinth since all he is concerned about is keeping up appearances.

Unesco has denied it misled the Australian government before the recommendation was made public.
The scientists said the body had shown leadership in recognising the threat of climate change to the reef’s world heritage properties. 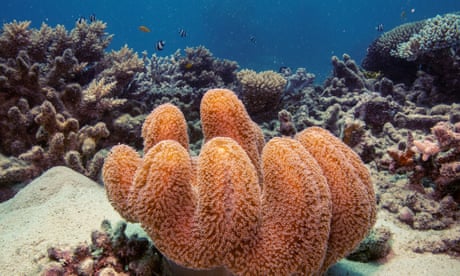 Political ploys and an ocean jewel: what’s behind the UN’s ‘in danger’ warning for the Great Barrier Reef
Read more
“Tragically, the reef has suffered extensive losses in recent years through three severe coral bleaching events, fuelled by global heating,” they wrote.
“Safeguarding the reef requires effective global action to reduce carbon emissions. Yet Australia has so far not pulled its weight in this global effort.
“We therefore greatly appreciate Unesco’s draft recommendation for Australia to urgently address the threat of climate change and welcome the draft report’s recognition that 1.5C [of global heating] is widely recognised as a critical threshold.”
Download original document
The scientists said they acknowledged the Australian and Queensland governments had made efforts to address local threats to the reef, including sediment and nutrient pollution at inshore coral reefs, but Unesco was correct to note “with the utmost concern” that water quality targets in the governments’ 2050 plan had not been met.
“The Great Barrier Reef is one of the most beautiful, biodiverse and precious places on Earth. We stand ready to help support Unesco’s efforts to secure the future of this global icon,” they wrote.
Quick GuideHow to get the latest news from Guardian Australia
Show
Other signatories to the letter are Prof Andréa Grottoli, president of the International Coral Reef Society, Prof Johan Rockström, the director of the Potsdam Institute for Climate Impact Research, and Dr Sylvia Earle, an oceanographer and chair of Mission Blue, which aims to achieve 30% protection of oceans by 2030.
In an opinion piece in the Australian on Wednesday, the federal environment minister, Sussan Ley, said she was stunned by the draft recommendation by Unesco’s world heritage committee reef, and repeated her suggestion the process had been politicised.
She said an “in danger” listing was in effect asking a country to change or accelerate the improvement of its management of a world heritage site.
“Are the [Unesco] advisers seriously suggesting Australia can single-handedly change the emissions trajectory of the whole world?” she wrote. 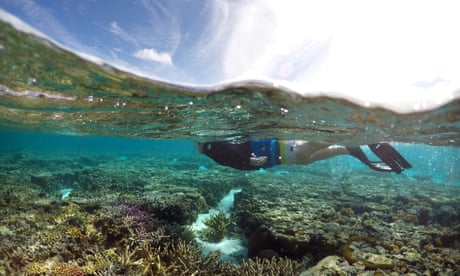 Unesco says ‘in danger’ listing would be ‘call to action’ on Great Barrier Reef
Read more
“Unesco representatives admit they want to sound an international warning note about the dire fate that awaits all countries if global warming is not halted. Australia shouldn’t be the poster child of a wider agenda.”
She said the World Heritage Centre had advised officials in May that none of Australia’s world heritage sites would be considered for “in danger” listing this year, and noted 11 other countries had joined it in writing to Unesco to express concern about “a broader lack of transparency and proper process”.
Unesco leaders have denied Australia was given an assurance the reef would not be considered in danger, or that the recommendation had been politicised. Dr Mechtild Rössler, director of the World Heritage Centre, last week told reporters that many governments misunderstood the “in danger” list.
“It is not a red list that ends up with less tourism, but it is really a call for action and that is the fundamental idea,” she said. The whole world needs to know there’s a site that’s under threat and we all have a duty to preserve [it] for generations to come.”
The letter from 12 countries has been interpreted by one former Australian world heritage official as the beginning of Australia’s promised lobbying effort to fight Unesco’s recommendation.
The prime minister, Scott Morrison, last week described Unesco’s process as “appalling” and said Australia had been “talking to our friends”.
Hoegh-Guldberg and Hughes, both from the ARC Centre of Excellence for Coral Reef Studies, said in a statement an “in danger” listing would focus attention on how to further limit damage to the reef.
“It presents a challenge to all nations to immediately reduce greenhouse gas emissions,” Hughes said.
A Unesco spokesperson said it welcomed the letter “from these distinguished and internationally renowned scientists”. They said it confirmed the technical analysis presented in its report.
Click to expand...

Should call Scummo Hyacinth since all he is concerned about is keeping up appearances.
Click to expand...

Staff member
Nah, Richard is a long suffering victim. Hyacinth it is!