Australia has scrapped its strife-torn $90bn submarine deal with France and entered a new pact with the United States and the United Kingdom to acquire nuclear-powered submarines.

Scott Morrison made the announcement early on Thursday in Canberra during a virtual address with Joe Biden and and Boris Johnson – a coordinated show of diplomatic strength clearly aimed at China, the rising power in the Indo-Pacific.

While some defence analysts have pushed for the development of nuclear-powered submarines in Australia for two decades, Australia does not have a domestic nuclear industry.

The prime minister told reporters: “We intend to build these submarines in Adelaide, Australia, in close cooperation with the United Kingdom and the United States. 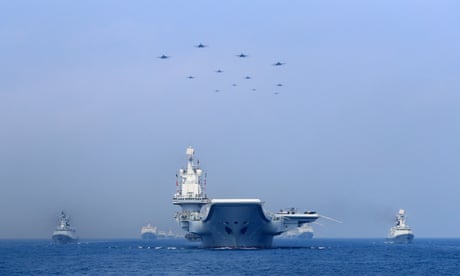 US, UK and Australia forge military alliance to counter China
Read more
“But let me be clear – Australia is not seeking to establish a nuclear industry or establish a civil nuclear capability, and we will continue to meet all of our nuclear non-proliferation obligations.”
Click to expand...

It NEVER made sense to buy nuclear powered subs and put diesel engines in them but the fuss that will arise in sleepy old Adelaide will be fun to observe!

Staff member
aren't the french currently building new submarines for us? How many subs do we need?

Staff member
Contract with the frogeaters is scrapped.
C

johnsmith said:
aren't the french currently building new submarines for us? How many subs do we need?
Click to expand...

We need real subs that don’t need to surface until the food runs out!

Chuck said:
We need real subs that don’t need to surface until the food runs out!
Click to expand...

Show those slants we ain't no pushover to their global domination designs.

Chuck said:
We need real subs that don’t need to surface until the food runs out!
Click to expand...

so why did the libs waste millions chasing pretend subs?

I agree 110% (except they cook Oriental Cuisine better than we do), we aren't under a dictatorship (yet), they are....the ordinary, every day Chinese People do as they are told or they are executed........

It's been the Chinese Communist dictators that's been killing & provoking the West since the late 40's.

It wasn't the North Korean People in Korea.....or the Vietnamese People in Vietnam.....the Chinese Communists have been behind it all.....testing us for 70+ years.....in Korea, & in Vietnam, & across the globe today......

The People of China, for the most part, are decent freedom loving people, it's the Chinese Communist Ideology of their minders that has slowly been spreading like a cancer, that has corrupted the world.....

So, with them you must be willing to fight fire with fire.....atoms with atoms!!! Show no weakness, & be ready to take the offensive if necessary......a 'she'll be right mate', flaccid passivity will not secure peace with them. No.....It's be ready to kill or be killed....they don't know any other way.
Last edited: Sep 17, 2021

Squire = A bend over, 'step & fetch it' servant of the massa.

Show those slants we ain't no pushover to their global domination designs.

Show those slants we ain't no pushover…

That word would be considered as being discriminative …we can’t even use the word "slopes"anymore.

The last fashionable word that I heard for Orientals in Aus is "power points", as our wall sockets have two inward slanting and a vertical socket!

Chuck said:
That word would be considered as being discriminative …we can’t even use the word "slopes"anymore.
Click to expand...

There is probably enough nuclear detritus scattered around SA from Maralinga explosions to power a submarine.

DreamRyderX said:
Squire = A bend over, 'step & fetch it' servant of the massa.

Please stop using fantasies of me to arouse yourself.