Forum rules
The rules for this board are in the Charter of Moderation. Off Topic is for fairly serious discussion of things other than politics and current affair.
Post Reply
1593 posts

Was just talking to dad, he has grandad's old cutting machine and everything that goes with it still sitting in the shed gathering dust. Maybe it's about time I actually had a go at faceting the stuff I dig up

Hell, why not? Got the machine, all the cutting wheels and attachments, grinding and polishing compounds and all the instruction manuals as well. Got heaps of practice material like black spinel, quartz, goshenite etc

Be quite some time before I'll feel confident enough to tackle a stone worth hundreds or thousands of dollars. As one of the faceting manuals says: "your first few stones will be ok to give to your mother-in-law but it's be a while before you can do one for that favourite girl"

But I like my mum-in-law so I'll just keep them in a box labelled "my first attempts".

Had a quick look at the machine, didn't take it out of the box. Got about half a dozen cutting and polishing wheels with it, all accessories by the looks. It actually still has a preform stone - the stone cut to the rough shape before actual faceting begins - still attached to the dop. Dunno what it is, it's just a clear, colourless stone. Could be quartz, mebbe topaz or Hartz range zircon. Will probably bring it home tomorrow.
Top

Ok, got the old girl home and set up 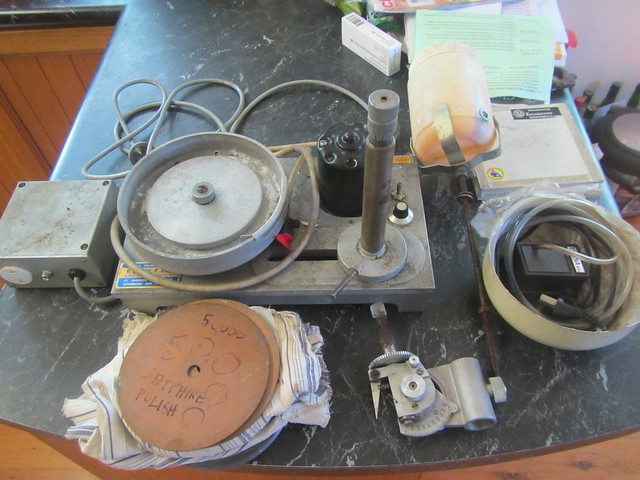 Pulled the desk lamp that was in the box with it out - fuck! Mice had chewed throught the cord! Trembling with dread, I carefully inspected the cords of the machine itself. Whew! They had not touched them thank fuck!

Have no dopping wax - the substance that glues the stone to the bit that holds it - but there was a stone still stuck on the dop. It was a preform, the roughly-shaped stone cut from the rough material before faceting begins. I would say it's either quartz or topaz but I can't be certain. Did a bit of reading of some of the books that came with it and decided to give it a lash. Followed the instructions for the Tower Cut, a cut not actually meant for transparent stones since it has no pavillion. Started on the coarse 100 diamond grit cutting wheel and put on 16 facets. Cleaned the stone thoroughly and went straight to the 3000 copper polishing lap and bingo! my first stone

She's rugged and uneven but instead of a frosted, rounded bit of rock I now have a clear, sparkly gem (sort of)

You will have to clear part of the back verandah and set the machine up there. Be heap of fun though!

Geological technicians grind a slice of rock thin and to a higher polish than a jeweller, use some grades of rouge for the final polishes.

Petrologists use a special microscope, forget the name of it. Acts like a normal ’scope so you can see crystals, inclusions etc, then a special lens is swung into the barrel and twists the light, you might see a star like in a star sapphire, all of that indicating the type of stone or its mineral makeup. Cute, eh?
Top

HBS Guy wrote:You will have to clear part of the back verandah and set the machine up there. Be heap of fun though!

Geological technicians grind a slice of rock thin and to a higher polish than a jeweller, use some grades of rouge for the final polishes.

Petrologists use a special microscope, forget the name of it. Acts like a normal ’scope so you can see crystals, inclusions etc, then a special lens is swung into the barrel and twists the light, you might see a star like in a star sapphire, all of that indicating the type of stone or its mineral makeup. Cute, eh?

Actually dunno what grades of stuff I have, haven't looked at all of them. I polished the stone with 3000 grit which made it quite transparent and sparkly, I know I have one there that goes to 5000. Will ask Greg the jeweller (who also cuts) for advice.
Top

Will make a lot of dust and noise, wouldn’t it?

Great you got it working!

Be worthwhile buying a bag of manufactured sapphires ($2!) and trying your hand facetting them!
Top

HBS Guy wrote:Will make a lot of dust and noise, wouldn’t it?

Great you got it working!

Be worthwhile buying a bag of manufactured sapphires ($2!) and trying your hand facetting them!

There is no dust at all because the lap requires constant lubrication when doing either - a small bottle with a tap and tube feeds a steady drip of water onto the lap while working. The splash guard that the cutting wheel sits in has a small drain hole with a tube attached to take away the water/stone slurry into a bucket underneath the cutting table.

Might grab myself some manufactured stuff, though I do have the advantage of having a ready supply of natural practice material for free. Got heaps of clear quartz, black spinel etc to play around with

Yeah—but that is nowhere near as hard as sapphire is what I was thinking.
Top

Heh, can tell I'm a newbie - bloke on the lapidary forum just told me that the 100 grit I used to cut facets on the stone is excellent for putting a finish on a concrete driveway

It's meant for grinding a piece of rough material into the preform shape only, not for faceting.

Won't be doing anything else until I get some wax. Can get it out the field but that's a while yet. Greg the jeweller will know where I can get some.
Top

Bugger! Jewellers supplies or manufacturing jewellers or lapidary/gem clubs should be able to sell you some.
Top

Yeah, a little bit goes a long way aparently. Can actually glue the stone to the dop with araldite but it's a barstard to remove. Wax is the way to go.
Top

Went and saw Greg at lunch time, he gave me some dopping wax so I gonna try and preform that stone and dop it tonight

Aussie Sapphire (lapidary supplier) says it's ok to use stuff like araldite, it's apparently not difficult to remove. Just heat the metal dop stick and the glue softens to the point where a gentle twist pops it straight out, usually nice an clean. But since I have the wax now I'm gonna give it a go.

Well, nice to know about the araldite.
Top

Whew! 2 hours to try and bring that stone down to a square preform for the simple square Hapcut and remove the inclusions and I'm still not finished. Eventually ground out that big, flat flaw (cleavage plane? topaz in that case maybe? looks like topaz) but I keep finding smaller ones. Will finish squaring it off tomorrow night and bung it on the dop then.
Top

Might have my first stone done before the weekend. Faceting without tears says: "I still have the first stone I faceted all those years ago, a quartz gem. It was an atrocity but at the time I thought it magnificent and so will you, and good on you". Some words of encouragement there