Hot topic: The scourge of negative gearing, Friends of the NBN and wrecking lives.  The economy and Poll tracking— all the polls.

Special Feature 1: Peter Costello and our current deficits.
Special Feature 2: Dr Turnbull and the wrong NBN prescription
Special Feature 3: The Denigration of science, technology and education.
.
Forum rules
The rules for this board are in the Charter of Moderation. Politics is for serious discussion of politics, economics and current affairs.
Post Reply
846 posts

FD.
I hope that bitch who was running their brothels for them gets raped with a cactus.
Top

Yup, below Shorten in the approval stakes. Come back abbott 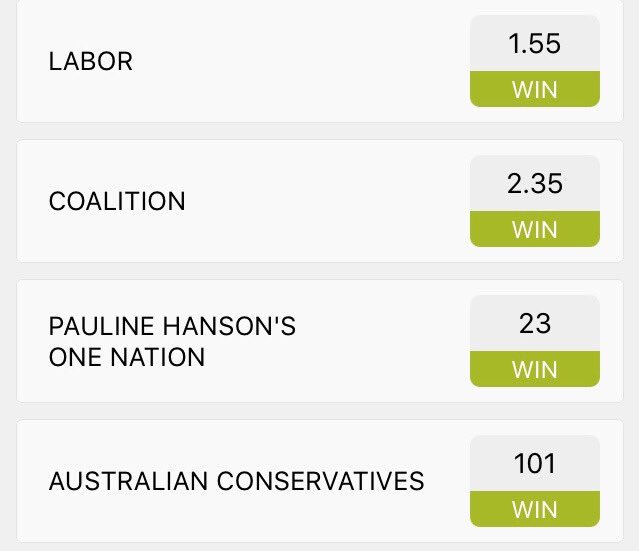 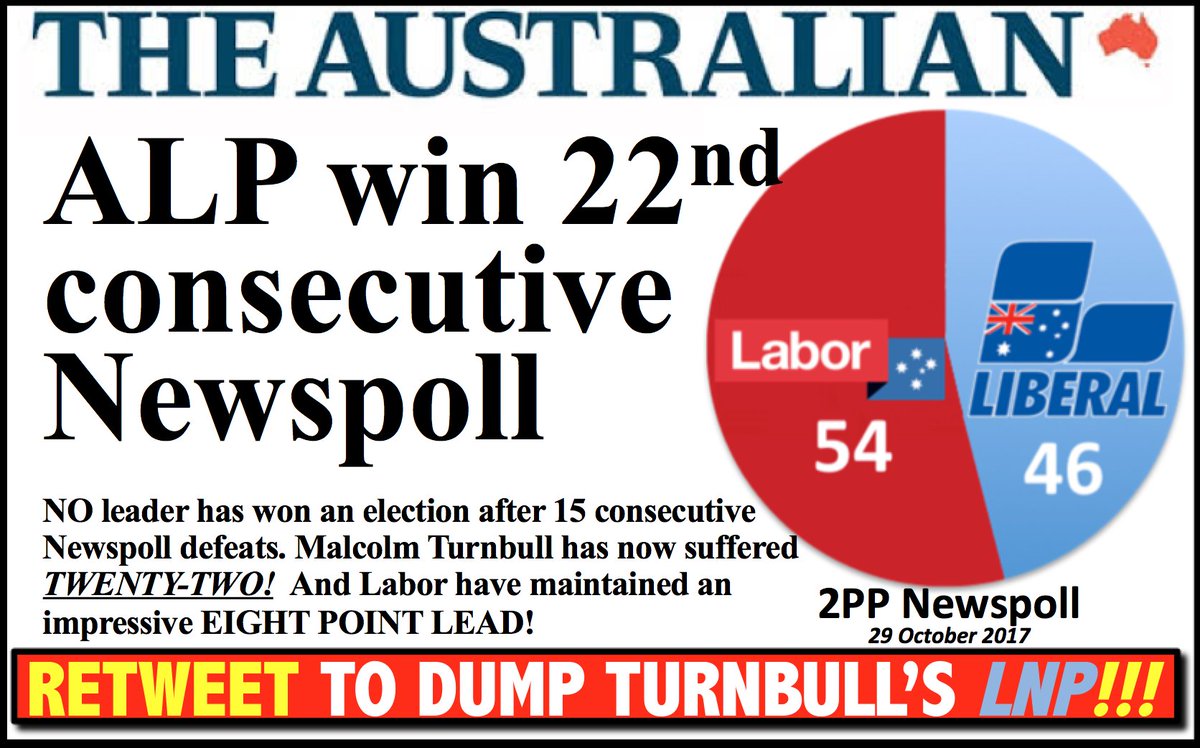 With a uniform swing of that size, the government would lose 21 seats on the current boundaries. Labor would gain most of them but not all (Grey could fall to NXT and the Greens could gain Batman from Labor). Of course, uniform swings never happen - seats with margins of 20% could fall, seats with margins under 2% could be retained, and sometimes seats even go the other way.

The 2PP is unreliable due to two factors: the One Nation factor and the method of calculating preferences that Newspoll uses.

One Nation is picking up the protest vote and their voters do not give as strong a flow of preferences to the Coalition as one might expect. These preference flows are volatile and hard to predict.

Worse for the government is that Newspoll does not explicitly ask respondents to allocate preferences, but uses preferences flows from the previous election to calculate a 2PP figure. This method is not reliable when a significant swing is on. This is why the major pollsters did not predict the outcome of the 2015 Queensland state election. In that election, they used the preference flows from the previous election, which did not take into account the significant swing to Labor. These polls were out by 2% - the difference between a 5-seat to 10-seat Coalition majority and the actual result of a hung Parliament.

What this means for the Federal Newspoll is that the actual 2PP could be wider, 55-45 or so. However, it's not possible to make this call due to the volatility of One Nation's preferences. If it was 55-45, a uniform swing on the current boundaries would only deliver three additional seats.

The most important factor that affects predictions is that redistributions are currently underway in Queensland (0 seats), Victoria (+1 seat), South Australia (-1 seat), Tasmania (0 seats) and the ACT (+1 seat). A redistribution has recently been completed in the Northern Territory. This redistribution will favour Labor because the current malapportionment favours the Coalition. Labor could gain two or three notional seats after the redistribution. Labor will certainly gain a notional seat in Victoria and the ACT, and may gain one in Queensland. The Turnbull government will go into the next election needing to gain seats to retain a majority, and that's not a good position for a moribund government to be in.
Top

Could ON get a seat in the HoR in Queensland?
Top

Could ON get a seat in the HoR in Queensland?

I assume you mean Federally.

I don't think it is likely. The last time they were prominent was in 1998. They gained 11 seats in the Queensland parliament in the election held on 13 June 1998 with 23% of the vote, but no seats Federally in the 1998 Federal election (3 October) with 9% of the national vote. They gained one Senate seat in Queensland with 15% of the vote.

To win seats Federally, they would need high-profile candidates running in winnable seats. In 2013, the Palmer United Party was very prominent, but only Palmer himself won a seat - and that by a very small margin. I don't expect One Nation to do any better.
Top

No, I don’t think so either.
Top

MUST be some way an election can be brought on?
Top

#BREAKING: The latest newspoll has revealed that @TurnbullMalcolm's approval rating has dropped from 41 to 36 per cent. @AustralianLabor widened its lead over the coalition 55% - 45% in two party terms.

) the approval rating is much more significant (statistically and politically.) This MUST strengthen the RWNJs to boot Malcolm and put abbott back as PM?

All turdful had to do really was run a reasonable government. He couldn’t do that. Crap Budgets, Robodebt, cutting pensions, now the Manus horror etc etc etc. Couldn’t even finish running out the NBN Labor had started, have now spent/committed $60Bn on a temporary network, biggest waste of taxpayers’ money ever, losing Lib support with every botched connection, failure to connect, lousy connection worse than the previous ADSL etc.
Top

Told ya Ipsos was wrong:

Just tiny movements within MoE so not significant. I would say LNP PV is too high due to sampling error, 33–34 is more what it is. ALP PV 37-38.

Labor is up, 55/45.So much for all yesterday’s blather about breezes and resets. All is within Margin of Error.

Julie Bishop is nowhere near preferred leader – “I dunno” is leading there.

Analysis of the last few NewsPolls shows the Libs trailing Labor 55:45 in the main capital cities and 54:46 nationally. 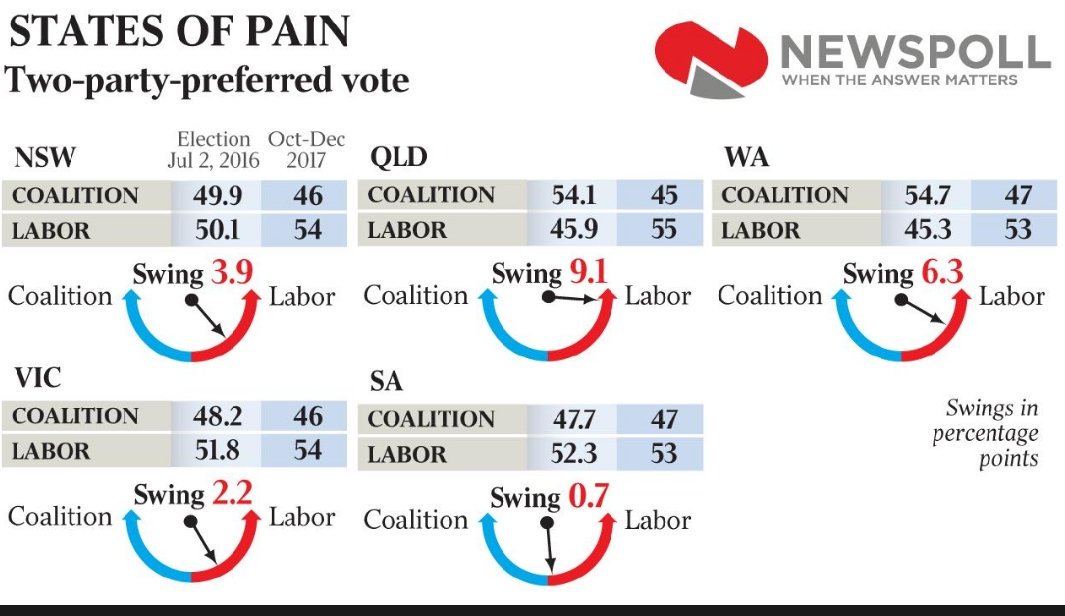 Bring on the election!
Top

First Essential poll. Oh dear. You are a Lib diehard supporter? Oh no, so the REACHTell poll for SKY got you excited, right? {pant pant}

Well, get some ice, OK? Ice, not icecream, fuckwad! OK, ice on your overheated brain? GOOD!

Oh dear, where did that (OzPol definition) NICE person go?

Polls play no roll in my political decisions when it comes to voting.

At the moment the Polls seem to be heading in the correct direction.

sleeping is good for you
Top

pinkeye wrote: Polls play no roll in my political decisions when it comes to voting.


polls aren't meant to play a part in your political decision, they are merely a snapshot into what the electorate is thinking about it's elected officials at any given moment
FD.
I hope that bitch who was running their brothels for them gets raped with a cactus.
Top

will turdball accept the standard he set for others, and resign when he gets to the 30th poll loss?

FD.
I hope that bitch who was running their brothels for them gets raped with a cactus.
Top

Will he have a choice?

Fuckwads: people are hurting because wages grow less than inflation, living expenses increase by more. What does the dickhead do? Talks about taxcuts for companies and the wealthy. Contrary to what Crocodile says, company tax cuts do not lead to more jobs.

Croc is so deluded he thinks retained earnings are cash. They are not. Cash flow and profit can be very different: a failing company selling assets at firesale prices has plenty cash coming in, but is not making profits.
Top

First NewsPoll of the year: