'The Darling will die': mass fish kill due to drought

For scientific papers on AGW, record happenings in the Arctic and the Greenland, Himalayan and Antarctic icesheets. Also weatherstorms and higher than average rainfalls and other extreme weather events.

'The Darling will die': mass fish kill due to drought

'The Darling will die': Scientists say mass fish kill due to over-extraction and drought

There is just not enough water flow to keep the river alive.

The recriminations between environmentalists and advocates for agriculture have started. Conflict and controversy will only delay solutions. 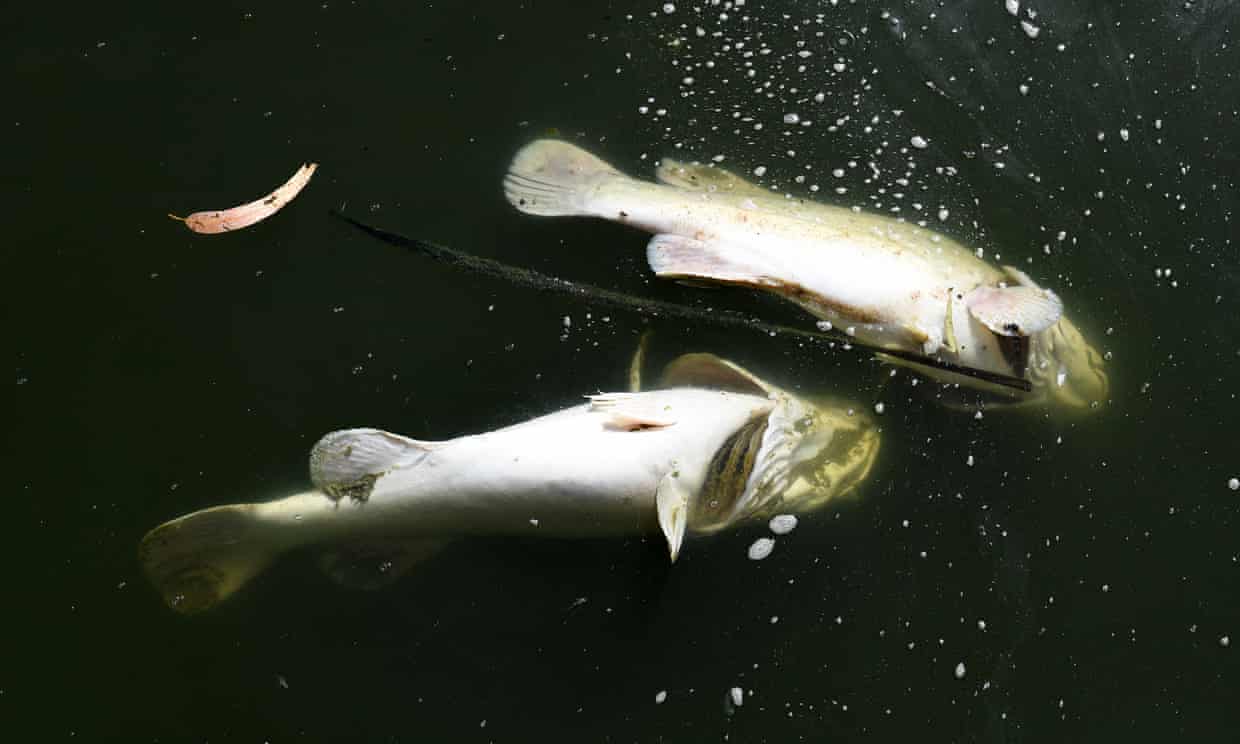 A scientific panel investigating the causes of three mass fish deaths at the Menindee lakes has pointed the finger squarely at those managing the Murray-Darling river system, saying the lack of flows was caused by a combination of drought and over-extraction, leading to the environmental disaster.

Up to one million native fish, including hundreds of thousands of small bony bream, Murray cod, up to 20 years old, and silver perch were killed in the three events. While there had been other fish kills during droughts, these were on an unprecedented scale, the report found.

“The conditions leading to this event are an interaction between a severe (but not unprecedented) drought and, more significantly, excess upstream diversion of water for irrigation,” the panel of scientists convened by the Academy of Science said. “Prior releases of water from Menindee Lakes contributed to lack of local reserves.”

Unless urgent steps are taken to restore flows in the Darling, Prof Craig Moritz, who chaired the panel, warned: “The Darling will die.”

“No one expects the river to run every year but they have cut the water so hard, the river is dying,” he said.

The report will again focus attention on the massive expansion of irrigated cotton farming in northern New South Wales, and the state’s commitment to the Murray-Darling basin plan.

We can help save the Murray-Darling, Indigenous nations say

The panel has called for an immediate effort over the next six months to restore flows, combined with a Menindee Lakes restoration plan focused on restoring its ecology, not saving water, as NSW hopes to do with its Menindee Lakes water saving plan.

It says there must be meaningful consultation with the Indigenous people who have native title along the river, as well as with local communities, to tap into local knowledge.

It is also calling on the federal government to immediately reverse last year’s decision to cut the environmental water recovery target for the northern basin by 70 gigalitres, a move the panel warns will further degrade the river.

But Moritz acknowledged there were limited options to prevent more fish deaths in the short term. Without “truckloads of rain” , there was almost no environmental water in storage upstream and letting small amounts of the bad-quality water go could make it worse.

The report, under the auspices of the Australian Academy of Science, was commissioned by the opposition leader, Bill Shorten, and released on Monday morning.

“I promised Australians I would get them answers on how this ecological disaster took place, and that’s what this report does, Shorten said.

“There is simply not enough environmental water held in the Darling River to meet critical environmental needs in times of drought,” he said.

“The Murray Darling Basin Plan was well designed by Labor, but its implementation has been mismanaged by the Liberals. That’s hurting the river, hurting farmers and hurting the environment,” he said.

Labor is now supporting the removal of a 1,500GL cap on water buybacks, which will clear the way for more purchases of water from farmers. But he did not say whether Labor would support a reversal of the 70GL cut to environmental water recovery in the Northern Basin – something it has supported to date.

The scientists made a point of saying they had consulted with the government’s rival panel, headed by Prof Robert Vertessy, and shared data and conclusions, which suggests it too will make similar findings when it is released in a few days.

The Murray Darling Basin Authority said it would study the report.

“The key academy finding, that flows in the northern rivers needs to be improved, is exactly what the Basin Plan sets out to achieve. As noted in the AAS report, this is especially challenging during drought,” it said.

It did not address the recommendation that the 70GL cut should be reversed.

The academy scientists agreed with the NSW Department of Primary Industries finding that the immediate cause of the fish deaths was stratification of the water column in the weir near Menindee, which led to blue green algae outbreaks in the warm surface water during a run of very hot days over 40C, and deoxygenated water below.

When the temperature dropped during a cool change, the algae died and the water column mixed, depleting the river of oxygen and causing the mass fish deaths. After the initial fish kill just before Christmas, the dead fish and algae on the bottom may have added to the problem.

But the academy report goes much further in analysing what has happened to long-term flows in the Darling. “Increasing diversions are related to pumping of environmental water, increased floodplain harvesting, policy changes in NSW in relation to the Barwon-Darling Water Sharing Plan and access to low flows and theft,” the report says.

“As a result of water resource development in the Barwon-Darling and its tributary catchments, maximum dry periods between low flow events have doubled and are sometimes 10 times longer, severely stressing ecosystems.”

The panel based its conclusions on the Murray-Darling Basin Authority’s own scientific work on flows from 2018.

It also cited a report to the Commonwealth Environmental Water Office which identified that low flows have reduced by 70% across most sections of the Barwon-Darling since 1990.

Decisions by the NSW government to drain the lakes meant there was no local reserves of water available.

The scientists said regular, low flows in the Darling were important in ensuring that native fish and invertebrate populations survived during dry periods, and upstream and downstream connectivity were maintained.

The panel was particularly critical of NSW and its 2012 water sharing plan. “The NSW Barwon-Darling Water Sharing Plan, and changes to it in 2012, contributed directly to the decline of low flows, independent of rainfall, and hence to the recent fish kills,” it said.

The scientists also warned that the implementation of the NSW floodplain harvesting policy would potentially legitimise growth in diversions. They said the take of groundwater was also likely to be contributing to the problem.

NSW said it was studying the report but immediately rejected two recommendations: that the cap on buybacks should be lifted as well as the assertion that the Northern Basin review should be repealed.

The Australian Conservation Foundation called for immediate action on the academy’s recommendation.

“The Australian Academy of Science has sounded a warning that the management and implementation of water recovery across the Murray-Darling Basin is deeply flawed, finding that excess diversion of water for irrigation was a root cause of this summer’s mass fish kills.

“More than a million dead fish floating in our rivers is a clear sign something must change.

The scientists were also asked to comment on whether climate change was contributing to the problems of the river system.

“The Murray-Darling Basin has increased in temperature by ~1 °C since 1910 and there is high confidence that the Northern Basin will continue to warm, towards a further 1–2 °C increase over the coming one to three decades. These large changes cannot be explained without anthropogenic emissions.”

But so far there was no detectable long-term change in observed annual precipitation.

“While climate change linked to increasing emissions has contributed to hotter conditions, it is unlikely that the observed reductions in flows is attributable to climate change alone,” they said.

If the Darling dies so does the GAB.

Apparently it was because there was some very good years just previous to the last two bad years that meant there was so many fish in the water all trying to breathe in the newly depleted resource, thus aiding algae complication and it all resulting it a big chaotic mess..

I think this why the latest report won't pin it on over-irrigation upstream.... although they do admit there is no way it could have helped.
"Oi!"
Top

HBS Guy wrote:If the Darling dies so does the GAB.

I cannot believe the fuckwits in Sydney & Canberra approved mining on the Liverpool plains. Sheer stupidity!

Why does the GAB die if the Darling dies?
"Oi!"
Top

Because the Darling basically runs over the rocks that make up the GAB and if the Darling doesn’t run the GAB does not get replenished.

Idiots in our governments are allowing mining and big irrigation interests destroy our water and soil.

Do you have fish hatcheries in Australia? We have places that breed and sell fish to put in your pond. (stock tank) We use the pond to water cattle and we catch fish as needed to eat. They also use the fish to stock newly made lakes. A fish hatchery may allow you to repopulate the river if the worst happens and you manage to get a hold of your water problems.
Top

HBS Guy wrote:Because the Darling basically runs over the rocks that make up the GAB and if the Darling doesn’t run the GAB does not get replenished.

Idiots in our governments are allowing mining and big irrigation interests destroy our water and soil.

I think there was just too much being sent over..
"Oi!"
Top

Well, then the story on the news didn't make any sense!