For scientific papers on AGW, record happenings in the Arctic and the Greenland, Himalayan and Antarctic icesheets. Also weatherstorms and higher than average rainfalls and other extreme weather events.

Livestock and animal deaths were widely reported and they have not yet stopped. Roads melted. Power generators stopped.

The BOM has predicted continued hot weather until April.

"There was less than 20 percent of normal rainfall for large areas of Australia".

While Australia sizzles the politicians are unaware and do not even have the problem on their screens.

Is Australia doomed by massive public ignorance and apathy?


Australia swelters through its hottest month on record, with January mean temperature exceeding 30C
Updated about 5 hours ago

It's official: January 2019 was Australia's hottest-ever month on record going all the way back to 1910, according to the monthly climate review released by the Bureau of Meteorology (BOM).

Key points:
There was less than 20 per cent of normal rainfall for large areas of Australia
Canberra airport had a record run of four days above 40C
BOM senior climatologist Andrew Watkins said last month's heat was unprecedented
It followed the hottest December on record for Australia — and there is no relief in sight for the months ahead.

January was a truly record-breaking month across several fronts: the highest minimum, the highest maximum and the highest mean temperatures for Australia as a whole.

The highest overnight minimum on record was broken multiple times with Wanaaring (Barrona Downs) in NSW currently holding the title at 36.6 degrees Celsius.

The mean temperature for January averaged across the country exceeded 30C — the first time this had occurred in any month, the BOM said.

And Adelaide had one of the city's hottest Januarys on record, with maximum temperatures the highest for at least 10 years.

For the first time since 1957, the BOM's Adelaide city site recorded zero rainfall for the month.

Western Australia had one of its hottest Januarys on record, but temperatures were cooler than average in parts of the west coast and south-west.

Rainfall for the state was below average and the month was the driest since 2005.

While most of WA was suffering in the heat, Perth recorded its coolest January in more than a decade and rainfall was about average.

The north-east of the state also experienced one of its driest Januarys on record.

Sydney had one of its warmest Januarys on record, with average rainfall.

Its rainfall was below average, with most of the state receiving less than 20 per cent of the month's average.

Melbourne was exceptionally warm, with some sites recording their highest ever January temperatures. The city also had one of the 10 driest Januarys on record.

The ACT also had its hottest January ever. The BOM's Canberra airport site had a record run of four days above 40C.

The Northern Territory recorded its hottest January and the delayed onset of the monsoon contributed to the Territory receiving less than half its average January rainfall.

Darwin had one of its warmest Januarys on record while rainfall was also below average.

Queensland similarly had its hottest January and a monsoon low brought heavy rainfall to parts of the state.

Brisbane was very warm, while rainfall was very low at about 20 per cent of the January average.

Tasmania had its hottest and driest January on record, as did Hobart.

Why so hot?
The predicted El Nino did not eventuate this summer but even without the climate driver we usually associate with hot conditions the temperatures soared.

BOM senior climatologist Andrew Watkins said there were a few factors at play in the unprecedented heat.

"We saw heatwave conditions affect large parts of the country through most of the month, with records broken for both duration and also individual daily extremes," Dr Watkins said.

"The main contributor to this heat was a persistent high-pressure system in the Tasman sea which was blocking any cold fronts and cooler air from impacting the south of the country.

"The warming trend, which has seen Australian temperatures increase by more than one degree in the last 100 years, also contributed to the unusually warm conditions."


What have the impacts been?
The stand-out events this month were the record-breaking heatwaves over the south-east of Australia.

He said there were also reports of agricultural production being affected.

Be prepared for the heat

Heatwaves kill far more people than other natural disasters. ABC Emergency has a checklist of things you can do to be ready.
"Things like on really hot days milk production goes down because the cows suffer from heat stress as well," he said.

"We are seeing reports from the viticulture industry too about grapes being sunburned and shrivelling."

Then there are the human impacts.

So far it has been too soon to say how the heatwaves have affected people's health.

But Risk Frontiers' research has shown that historically heatwaves are Australia's biggest killer in terms of natural hazards.

"In fact they are bigger than the sum total of all other fatalities from natural hazards put together," he said.

It is the elderly, those with chronic health conditions and the very young who are most at risk.

Is there an end in sight?
red red red red RED. the whole of Australia bathed in red indicating a (mainly) over 80% chance of above median maximum temps


The outlook for the next three months suggests temperatures are very likely to be warmer than average for the majority of Australia.

The country will likely be drier than average, particularly in the west, and low to near-median stream flows are expected.


We will adapt. Shame the politicians are taking so long to act decisively on climate... I think the vast majority of the worlds citizens are on board, waiting and willing for meaningful action.
Top

Too bad. Too late. WE might adapt.. but few of our world's inhabitants are as adaptable to climate changes as we.

So Australia swelters and burns in record heat .. whilst on the other hand we have the US. And presumably Canada.
Coldest temperatures ever... !! The Polar Vortex is causing continental Nth America to experience extreme cold.

The Arctic Circle is warmer... not the first time, but definitely not a happy circumstance...,,,

See, it is like I have said before... the Earth is an organic system striving for Balance. Always ... Balance.

We the people will do sweet f'll by waiting!

Global temperature in January 2019 (at +0.88°C relative to 1951-1980 base period) was the fourth
warmest January in the 140-year record since 1880. The warmest Januarys were 2016 (+1.15°C), 2017
(+0.97°C) and 2007 (+0.94°C).
Northeastern Canada was unusually cool (as much as 3.6°C below the 1951-1980 mean), but areas in
Siberia and northwestern Canada were more than +5°C above normal, where ‘normal’ is defined as the
1951-1980 mean. Australia experienced a scorching summer, most of the country at least +3°C above
normal. The global temperature pattern is typical of El Ninos (See maps on
http://www.columbia.edu/~mhs119/ElNino-LaNina/), despite the current El Nino being very weak.
Almost the entire United States was warmer than normal, averaged over the month. Of course the
monthly mean can hide extreme cold spells that cause people to wonder where “global warming” has
gone, when it has not gone anywhere. Some recent cold weather may even be unusually cold, because
of behavior of the Arctic vortex, as noted in prior temperature updates. Examples of cold weather are
shown on the right in the figure below. The daily data are from NOAA

January temp anomalies:
You do not have the required permissions to view the files attached to this post.
Top

Lol, China?!!? FM this will be an interesting century!

..ah, and the most populous parts of Australia who have significant trade relations with China... lol

Wait... I don't like that whole Eurasia thing basically but IT'S ONLY JANUARY LOL

It looks like somebody had a giant dump in central NSW. Not enough water there to flush it.
Top

Australians have just lived through the country's hottest March on record, following the hottest summer on record.

In France and Germany heat records are tumbling like ninepins, more heat records broken than ever before. Germany hottest ever summer.

Two years ago, 2017 nearly as hot as El Nino year 2016, saw heatwaves in Sweden, including the bits in the Arctic circle. Now it is all of Europe.

Deniers will point to cold winter and spring in the eastern parts US & Canada—but that is due to a bow in the Jet Stream sending Arctic air south: air that replaced the air in the Arctic was warmer and we saw a warm Arctic and a new record low of sea ice extent in April and even now sea ice extent is either just below, equal or marginally less than record low extent in 2018.

Deniers and paid liars like Dubyne talk of record snow, rain, floods: if the globe was cooling like they pretend it is then there would be less evaporation meaning less precipitation. This is junior HS science, as I never fail to respond to these claims. One idiot said to me the cold is squeezing the last moisture out the atmosphere—I replied that the supposed GSM/globull kewling had supposedly been happening for 5 years and any moisture should have been squeezed out by now. Haven’t seen the idiot since. Maybe he started thinking?
Top 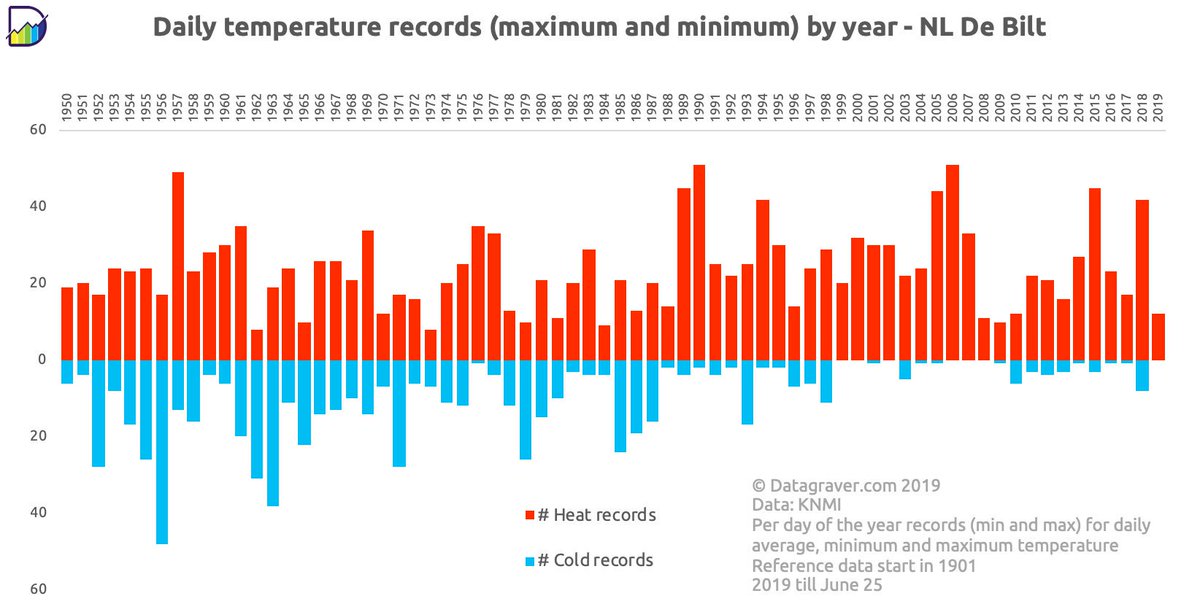 This is another way of showing the shift in the distribution of temperatures:
You do not have the required permissions to view the files attached to this post.
Top

We the people will do sweet f'll by waiting!

That's what you said wasn't it?

Some will do nothing, others will do something.
Top

I will be growing trees, growing my own fruit and veg as much as poss—front yard will be all vege patch so not many food miles. I try to encourage people to think rationally, not think a GSM will save them from AGW etc and generally try to leave but a light footmark on nature.

I probably fail in much of it except the fruit growing part and having solar panels, windmills and a biodiesel generator for when things are a bit dire, generation wise. I drive a Mazda 3, 2L ICE. EV better but no $$$ for it yet. It is the biggest car I have owned and I decided on Mazda3 not 2 because of the interstate trips I am taking. Drove a Laser for a long time and liked it but the workload I imposed on it broke it.
Top

another revolutionary I see.
sleeping is good for you
Top
Post Reply
18 posts • Page 1 of 1