What will the NBN REALLY cost?

A subforum for discussing the NBN: what it was, the tragedy of the NBN and how the original vision can be brought to life if different in detail.
Forum rules
Please keep discussion civil and focussed on the NBN.
Locked
10 posts • Page 1 of 1

What will the NBN REALLY cost?

The NBN 2016 Corporate Plan states that the average capital cost (capex) to connect a home or business to the NBN using FTTP is A$3,700. But the real cost for a FTTP connection is probably less than this.

The A$3,700 figure quoted by nbn co is based on old construction techniques that have been superseded in other parts of the world. The costs of rolling-out FTTP in New Zealand, for example, have been dropping steadily in recent years and will soon be A$2,900 per premises. For some reason, NBN Co has yet to acknowledge the lessons learned in New Zealand.


Let’s give NBN Co the benefit of the doubt and assume that the A$3,700 cost per premises for FTTP is correct. In comparison, the 2016 Corporate Plan states that the average capital cost for a FTTN connection is A$1,600, or A$2,100 less than FTTP.

Then we get to the HFC part of the MTM:

For an upgraded hybrid-fibre-coax (HFC) connection the capital cost is A$1,100, or A$2,600 less. However, in light of recent revelations in a leaked document from NBN Co published by Fairfax indicating that it may be necessary to overbuild Optus’ HFC network, the savings offered by HFC will not be as good.

It will cost $375m to rerun(!) the Optus HFC. Run FTTH over the power poles for goodness sake! Cheaper and better!


At the end of construction, the MTM network will provide FTTN to 4.5 million premises and HFC to 4 million premises. Labor’s new approach is to replace as many as possible of these 4.5 million FTTN connections by FTTP. The maximum additional capital cost to do this would be 4.5 million times A$2,100, or A$9.5 billion.

Peak funding is discussed then:

In fact, it was something like 4 years after completion of the MTM and FTTP would be the better deal for the country because FTTH just provides much more ARPU.


This is well documented by high-profile companies such as Ovum, which predicts FTTP services will drive the highest global growth rates for broadband revenues over the next five years, based on premium speeds of 100 Mbps and higher.

In light of all these factors, why is NBN Co’s cost estimate for a hypothetical FTTP network so large? The NBN Corporate plan provides no detailed information on its financial modelling, but it states that an all-FTTP network would take until 2026 to 2028 to complete.

If the timeframe was indeed as long as this, the revenue stream would be delayed. This could indeed lead to unrealistically large numbers for the peak funding cost of FTTP.

So where does the 2026 to 2028 timeframe come from? My guess is that NBN Co has simply extrapolated from the present rollout rate for FTTP, which has not increased much since 2013. One piece of supporting information comes from a Senate Estimates meeting, where NBN Co confirmed that its A$74-84 billion number was not for a “continued” FTTP network but for a “restart” from the current plan.

Fiddling the figures is what NBN Co is good at. Not at rolling out the best network. A $700,000 name/logo change is about the best they have done!


NBN Co waited until September this year to hire additional staff, increasing the number of employees from 3,400 to 4,500 to speed up the rollout of FTTN. If it had hired these additional staff in 2013 and focused on the FTTP rollout, the network could well have been completed by around 2020 or 2021.

Telstra has announced that is has entered into a memorandum of understanding (MoU) with the National Broadband Network (NBN) company for a "significant contract" to manage the design, engineering, procuring, and construction of NBN's hybrid fibre-coaxial (HFC) network currently within Telstra's HFC footprint.

They also get work fixing up the copper they stopped fixing 10 years ago. Meantime, ADSL speeds slide slowly down to dialup speeds.

Optus in on the act, too, with deal to build and maintain HFC network sold to nbn

You can’t make this stuff up: after selling its copper hybrid fibre-coax (HFC) networks to nbn, Telstra has won contracts to maintain those networks and to re-design the latter to carry the DOCSIS 3.1 data transmission standard

So the copper and the HFC that Telstra & Optus neglected they are now being paid to repair, maintain and build out. DOCSIS3.1 gets mentioned but I don’t think there is a budget for it.
Top


It costs $4,400 to install fibre to the premises (FTTP) but only $2,100 to install fibre to the node (FTTN). Recent figures from NBN Co suggest that when the OPEX (Operating Expenses) paid per year to run these services and Revenue generated from these services is taken into account, then FTTP may be better value than FTTN in as short a period as 6 1/2 years. See the Graph below, which shows Cash generated by FTTP exceeds that generated by FTTN after 6 1/2 years. The graph shows total costs for FTTP and FTTN (including CAPEX and OPEX) become equivalent ten years after installation. Coincidentally, the graph shows FTTP breaks even (total revenue exceeds total costs, including CAPEX), at the same time, after ten years. The equivalent breakeven time for FTTN is 30 years, using the numbers below. This graph does not take into account build time, which I will deal with in a second post. 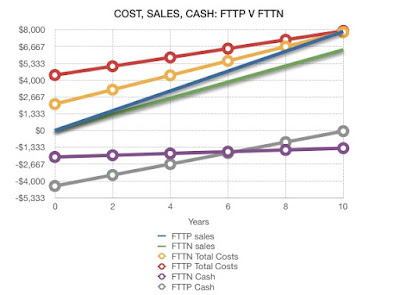 FTTN never makes a profit. We would save money (Income-Costs) by starting to run FTTH again NOW!

The MTM will not be worth as much as FTTP after just 76 months, 6/1/3 years. That assumes the $4400 CAPEX per connection is correct and I doubt it is—it was a figure loaded with $700OPEX and it came from Turncoat’s cronies, exTelstra all and so not reliable. Meanwhile MTM costs keep blowing out.

This would have been known. That meeting called by Southcott and addressed by Turncoat, all the questions afterwards, from Lib members/supporters, were about problems with the copper! Yet STILL the idiot went ahead with the idiotic MTM that is now blowing up in his face!
Top

Some poor sod on the Hills face in Adelaide, under 5Km from the city centre and in line of sight from the CBD. . .will have his ADSL cut off and be put on satellite!

This sort of shit is why the 2 purpose–built NBN satellites are over subscribed. NBN Co is counting the pennies instead of providing a decent service, even tho the MTM is LESS value for money than FTTH and even tho Netflix & other VOD players are saturating the network. CRAZY!
Top

FTTN is proving to be as useless as tits on a bull.

While the liars/propagandists at NBN Co deny it, looks like FTTDp, Fibre to the Distribution point will be the go. Netflix has written “finis, wrong!” to the make believe CBA and documents from NBN Co. NBN Co is WAY behind in the rollout.

So distribution points, like a minimicro node capable of serving about 4 homes will be installed. GFast can then be run on the copper tails running into each house. Still not as good as FTTH but a homeowner can/might have to where the tail can’t carry GFast run fibre out to the Dp. I won’t do that here, Tassie has FTTH.

But uploading pictures takes ages now, downloading takes noticeably longer—Netflix is just saturating the excuse of a broadband "network" we have.
Top

This is what happens when the regressives are in charge

Meanwhile, carrier pidgeon would be faster than my internet here.

It just beggars belief that this mob can't grasp the notion of technological progress. If I was in charge, a world-class national communication infrastructure would be right up toward the top on the priority list.
Top
Locked
10 posts • Page 1 of 1

Return to “Friends of the NBN”