Forum rules
The rules for this board are in the Charter of Moderation. Off Topic is for fairly serious discussion of things other than politics and current affair.
Post Reply
1593 posts

The bloke better not have changed his mind when we get there the same way that other prick did - 400km drive for nothing in that case (800km round trip!) I'm sure it'll work out ok.

Showed that green sapphire to Vic the faceting teacher at the club - he says it will cut a small stone.

Showed him the amethyst. It won't cut, it's too shattered - but he doesn't believe it is amethyst. Says our first instinct was correct - it's a big zircon. Far too heavy to be quartz of any kind. Funny thing is that when we showed it to Col out there the other week, he said it was amethyst and that it turns up in his wash from time to time - but that even though it's not heavy, for some reason it always seems to get trapped in the pulsator with all the heavies. Erm....wouldn't that suggest that it is heavy - like zircon?

I'm still working on my first cab but the young bloke has finished his second - a piece of that chalcedony. Unfortunately, it was one where the orange colour was only on the outside but it still looks nice enough cabbed - it has an orange splotch in the middle of the stone that makes it more interesting. He wants to set it in a pendant for his mum for mothers day. Can get cheap settings from Lincraft apparently - bigger variety if you order from an online source but I doubt it would get here in time.

Anyway, I'd better turn in - catch you tomorrow night...hopefully with a pulsator in tow

Gonna head into the club soon - young bloke's birthday on Friday so we won't be going in then. Won't leave wife at home by herself with a bunch of 13 year-olds

Young bloke has made a pendant to give to his mum on Sunday, his second cabachon. It's a piece of that chalcedony. It was orange when he started but that was just a thin outer layer - the finished cab is translucent white with an orange fish-shaped splotch in the centre. On the advice from the bloke from the club, I went to Lincraft and found a setting to put it into, a six-petalled flower. They had shitloads of jewellery setting for a few bucks each but this was the only one big enough to take the size stone he has cabbed. Will post a piccie when complete.

Meanwhile, I managed to find a piece of chalcedony that is definately orange right the way through. It's only small but I'll ask if a small cab can be cut from it. Also taking that 150 carat sapphire from Russian gully in to show Vic, see if he thinks there's recoverable material in it.
Top

150ct? Must be able to do something with it?
Top

HBS Guy wrote:150ct? Must be able to do something with it?

Oh, I'm quite sure there's plenty of cuttable stone in it - just so bloody dark, that's all. Mebbe get it cooked and hopefully lighten it a bit.
Top

No, cooking would more likely improve the value as long as it was worth doing in the first place. Vic wasn't there last night, couple of people had a look and remarked how dark it was. Dark blue with a green cross-table tends to cut a stone that appears black. But there's a lot of cuttable material in it and I think I will get a few opinions.
Top

Yeah, nothing to lose getting a couple expert opinions.
Top

Set that stone the young bloke cabbed into the silver (not real sterling silver obviously) setting using epoxy resin. The thing actually moved slightly after I set it, probably used a bit too much epoxy and also, while the stone does suit the look of the setting it's actually too big for the little flat cup and is sitting on it rather than in it. Still pretty dead on left to right but has moved very slightly downward. Will order my own from now on - the good thing about the templates at the club that you stencil the stone for the cab with is that each apeture has a corresponding serial number and the company that makes the stencils also makes jewellery fittings with the exact size match to each number so you can buy things that your stones will fit perfectly into as long as your cutting out is accurate.

Will take a couple of piccies tomorrow or Sunday - the lounge room has been taken over by half a dozen thirteen year old boys (young blokes birthday) and this laptop sucks for uploading photos.
Top

Well, wish him a very happy birthday from “the Monk.”
Top

I'm down the end room at the moment, they aren't too noisy though - having a Harry Potter movie marathon.
Top

The right age for that, I guess.
Top

Ok, here it is - looks like a bleeding fertilized egg 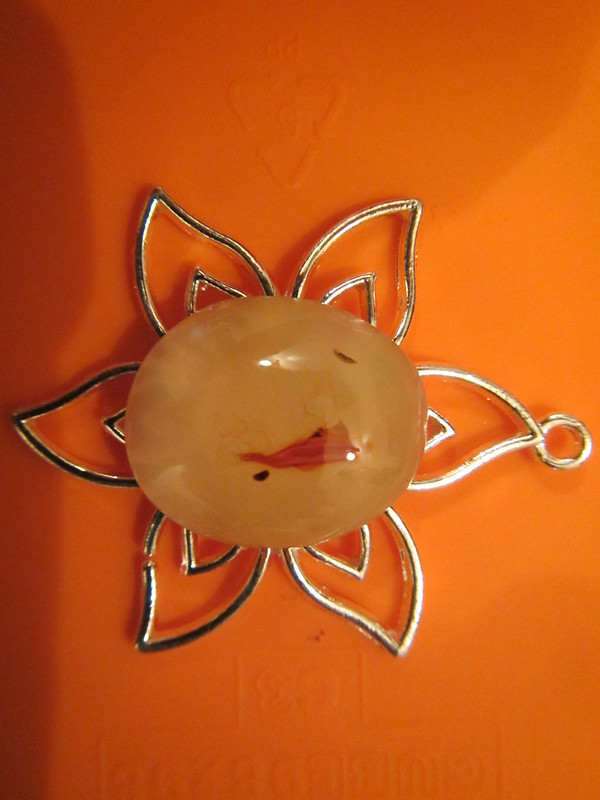 The translucency when held to the light shows the setting is meant for a smaller stone - it's only meant to fill the central part. 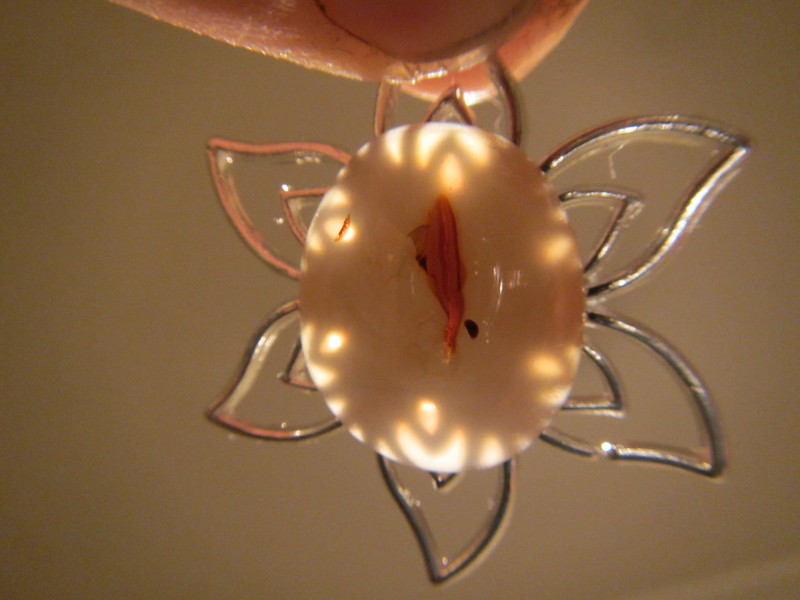 She was delighted with here pressie

Given how cheaply young bloke and I can make them, she'll probably eventually end up with one for every day of the year.
Top

Ok, getting ready to head into the club. Dad found a chunk of tigereye among his collection, will cut it on the trim saw and cab it - should look great cabbed with it's natural cat's eye feature.

Pretty sure it's not dangerous - can you believe that the stuff used to be blue asbestos before being metamorphasized by volcanic heat? The lethal little microscopic glass fibres have apparently been fused together as a single mass and cannot be liberated into the air by grinding. I hope.
Top

Craig the gemmologist just told me that it's not dangerous - the asbestos has been replaced by a different mineral that lacks the dangerous properties of asbestos. My piece is mostly red with some faint gold but I've now been told that it comes in red, gold, blue, green and pink and in any combination of those colours. They actually have a piece of blue asbestos from Wittenoom there at the club, in plastic wrap in a sealed jar.

He also told me that having done the tests, that clear material from Hartz range is almost certainly quartz

Bummer dude, thought I had found some rare gem mineral. Still, it's so beautifully clear that some of the chunkier pieces will facet nice stones.

Couldn't use the trim saw there - didn't know that smaller pieces of material need to be glued to a piece of board so that they can be clamped properly, otherwise they will wander around and buckle the saw blade.
Top

Getting ready to head in. Tiger eye epoxy resined to the board to be sliced in the trim saw for cabbing. Might cut out the shape but I have a chalcedony cab to finish before moving on. Will take a few little thunder eggs in and grind a side flat on the bench grinder so they can be attached to board as well.
Top

Have fun. Think about a WEA or TAFE course in gemmology/jewelry making and the like.
Top

HBS Guy wrote:Have fun. Think about a WEA or TAFE course in gemmology/jewelry making and the like.

Not a bad idea, should look into it - hopefully budgie fuckwit doesn't scuttle it.

They're doing gold and silver casting next weekend, definately want to go along and look at that.

Took a slab from that tiger eye, young bloke cabbed a piece. He had the shape nice and even and when he went back to smooth out a little flat spot, he went to the wrong wheel - 100 grit, the coarsest there is - and prompty trashed it. He was devastated! Luckily, an experienced member salvaged it for him so he could start again. Should be ok but is now much smaller