What are you reading?

pinkeye said:
There is no need to guess Lols. These people were fleeing from their homes because they were not fascists, and couldn't survive the coming regime... Mussolini was a good mate of Hitler, and people that could see the writing on the wall, LEFT ASAP.

Something only new immigrants to this country seem to undestand. All us cozy aussies, so smug... we have barely been a nation for 120 years..
I despise our government, and I despise people who buy into the propaganda we've all lived with for decades and decades.

We have to CHANGE. WE must REALIZE we aren't the greatest thing on earth.. FFS..

Sorry lost the plot there, but only a little bit.

Just, don't get too comfortable, because times are changing and it is up to us how we manage it, OR NOT.
Click to expand...

I wasn't sure exactly what you meant by we have to change. Do you mean humankind or do you just mean aussies?
One thing that worries me a bit is this (dare I say fashionable) contempt some people have for everything in our culture, that is, anglo saxon culture.
No, we may not be the greatest thing on earth. In my opinion, no nation and no nationality is that. We're all humans, a mix of good and bad.

But having said that, we have a lot to be thankful for. Australia, despite imperfections and injustices, is still one of the most peaceful places on earth. Most of us have a better standard of living than probably 90% of the people who have ever lived.
Our politicians may not be perfect either, but we haven't had a Hitler or Mussolini figure.
There's a reason the British had an empire and it is that at the time, they were one of the most powerful groups on earth in nearly every field. They led the industrial revolution.
There's a reason so many other countries aren't as well off as we are and it is because they haven't run things so well.
I remember listening (several years ago) to a community worker who was originally from a country with conflict. I think it may have been Afghanistan but not 100% sure. What she said was that something like 80% of the people there were displaced (because of political upheaval). And most only had education to a year 3 standard, if that. That most of the roads and permanent solid buildings there were from British occupation a century earlier and the people there were unable to build their own roads or buildings because no one there had the skill. They would need outsiders to do the job.

These are humans in crisis. Ordinary people who probably just want to be left alone in peace to bring up their families but they are surrounded by corruption and violence from their own people.

I am definitely not saying we don't have any problems here in Australia or any injustices or things we could do better. But we are still getting a lot of things right and I don't think we should be ashamed of our culture.

Indeed.. but I was actually saying HUMANS need to change. The flow , in my mind went on to all humans, but thanks I didn't make that clear.

I think the only way that may happen is through random genetic mutations. Anything humans set out to do .. ultimately lead to our ending.

Australia is just another mini feudal kingdom.. at war with any others they feel threatened by.
Australians, as a people, and a government, reflect that fear.

pinkeye said:
Indeed.. but I was actually saying HUMANS need to change. The flow , in my mind went on to all humans, but thanks I didn't make that clear.

I think the only way that may happen is through random genetic mutations. Anything humans set out to do .. ultimately lead to our ending.

Australia is just another mini feudal kingdom.. at war with any others they feel threatened by.
Australians, as a people, and a government, reflect that fear.

Don't you think this is just human nature though, to be at war or at least in conflict with groups we feel threatened by?
I would think this is actually necessary to human survival, it's how we have made it through for thousands of years

It is a sensible thing to feel fear at times.
Same as pain. Apparently there are some people who don't feel pain normally. And that puts them at very high risk in everyday life. Likely to touch hot things without noticing and get burnt etc

I see fear as a similar thing, it can make us cautious in what could be dangerous situations.

I don't know that human nature will change. or not quickly.
Part of your frustration might come from the fact that (I believe, anyway) that humans often think they can predict how things will go if they do a certain thing or follow a certain path, when the truth is, other factors come into play and we can't really predict how things will turn out ahead of time. We can only do what we think is right and hope for the best.

What we cover with the term 'human nature' are enormous variations in individual examples of the species. We are unpredictable BUT
We don't change quickly, genetically, except by mutation.

That could be acquired via a corona virus EG,
Just saying ,, we do NOT KNOW. :frustrated

Human nature is mysterious...and yet, RIGHT IN OUR FACE. !

I don't think warfare is a default.... aka 'normal' place for human society..I do think most of us want to live peaceful lives..... Some of us are descendants of Bonobos , but MOST are from the Chimps.
But even Chimps get tired..?? Do they ?? NO they just pass on leadership of the troop to the next (apparent) strongest male. ( eg TRUMP)
BUT always we will face the Abyss. We are born to conflict.. in every age.
So I don't think it is necessarily human nature to war on our neighbours...
But perhaps... INDEED .. FEAR RULES.

In fact you'd have to say FEAR RULES..
S

I agree, fear rules.
I don't think conflict always has to be in war though, thank goodness.

I do have one story that to me epitomises human reactions though. It's a tale my father told us and wrote when I asked him to record some of the story of his life.
As a teenager, he joined the Navy towards the very end of WW2. So he was a very young man when he sailed off on the HMAS Hobart to the conflict in the Sth Pacific. His ship was with the US 7th fleet at the signing of the surrender in Tokyo Bay and later, as part of the occupational force, he was stationed in Japan. He got to walk through Hiroshima. Now, dad seems to have gotten on okay with the Japanese people he worked with at that time, he wrote fondly of some of them. (Dad was enlisted a cook by the way, but he sure was no chef).
Anyway, he wrote that Hiroshima was just overwhelming, the devastation was like nothing they had ever seen. I think his whole war experience turned him off war forever, to be quite honest.
But here's the thing. He said that they were overwhelmed by the horror of Hiroshima and felt for those who lived as much as those who died. BUT they were immensely relieved that it had happened to the Japanese rather to any Australian cities. And he never thought for a minute that Hiroshima was unjustified because the war would have dragged on for many more months without it, Japan was never going to surrender.

And that's the real conflict, isn't it. We can often feel empathy for others but when it comes down to it, people want to protect their family, their home, maybe their country. The closer something is to threatening those, the more people react.

I think we have been lucky in the years since. No world wars, no starvation, no depression, at least in Australia. I did read that Russia came close to unleashing nuclear power against USA in the 1980s by accident. Scary, isn't it.
I just hope our children & their children have the chance to live in relative peace but sometimes I think the world has gone mad.

Yes
I agree.
We have been fortunate.. well some of us have.
But that is another matter.

Our government talks up the fear.
I, personally, know what catastrophic thinking about your apparent circumstances or ideas can do to your peace of mind.
Protecting family from real, or imaginary, enemies is not uncommon. Many humans are unsound of mind.

There you go.. an example of catastrophic thinking.

HMM SO BACK ON TOPIC... Just started reading a new (to me ) John Rebus Novel, by Ian Rankin.

The genuine author of Scottish Crime Fiction.. his writing is almost peerless.

If I tried..? could I come up with a better crime fiction author anywhere..// ??
pERHAPS, BUT NEEDS DISCUSSIN.

pinkeye said:
HMM SO BACK ON TOPIC... Just started reading a new (to me ) John Rebus Novel, by Ian Rankin.

The genuine author of Scottish Crime Fiction.. his writing is almost peerless.

If I tried..? could I come up with a better crime fiction author anywhere..// ??
pERHAPS, BUT NEEDS DISCUSSIN.
Click to expand...

What is the name of the novel? I will look out for it once I can as I love crime fiction. Unfortunately the libraries are shut here and will be for a while and I think all book stores etc will be shut too within days. I am really, really missing access to books, I used to borrow from the library every week.

Ian Rankin
In a A House of Lies.

Just finished it.. a classic scottish crime novel.. The latest.. so Rebus is no longer a cop.. he is retired, but still manages to solve an extremely baffling cold case, etc....


BUT if you haven't read about REBUS before go for the earlier works...
Absolute classics.
There are at least 20 prior novels.

Hate to suggest it but E-Books..? My library is still open and I'm off there tomorrow. /

They must be out there.. Libraries in QLD allow you to access e-books. And the Library service is FREE to residents of the Council area.

Staff member
I just finished reading “Once A Warrior”, by Jake Wood.

Even if I didn’t have a personal connection to this book, it would be an excellent read.

Jake was a U.S. Marine who served in the same unit as my son, at the same time, and who went on the same two deployments, one to Iraq and one to Afghanistan.

After getting out of the Marines, very spontaneously, Jake and a few of his fellow battle buddies founded Team Rubicon. At their own expense, they deployed themselves to Haiti right after its devastating earthquake, and they did everything they could to give emergency lifesaving medical treatment to the survivors.

The book takes the reader through the evolution of Team Rubicon up to the present day.

But it also intimately follows Jake’s personal struggles as an aftermath of the wars he fought in.

To try to make this relevant to my Australian friends here, those struggles and challenges are the same ones your fellow Australians who fought in Afghanistan have faced and dealt with.

This book contains sadness and loss, but also the inspiration that comes from never giving up and from the spirit of service that lives in the hearts of Team Rubicon.

You don’t have to be an American to read and love this book. I highly recommend it. If you’re a reader, take a chance on this one. You won’t be disappointed. 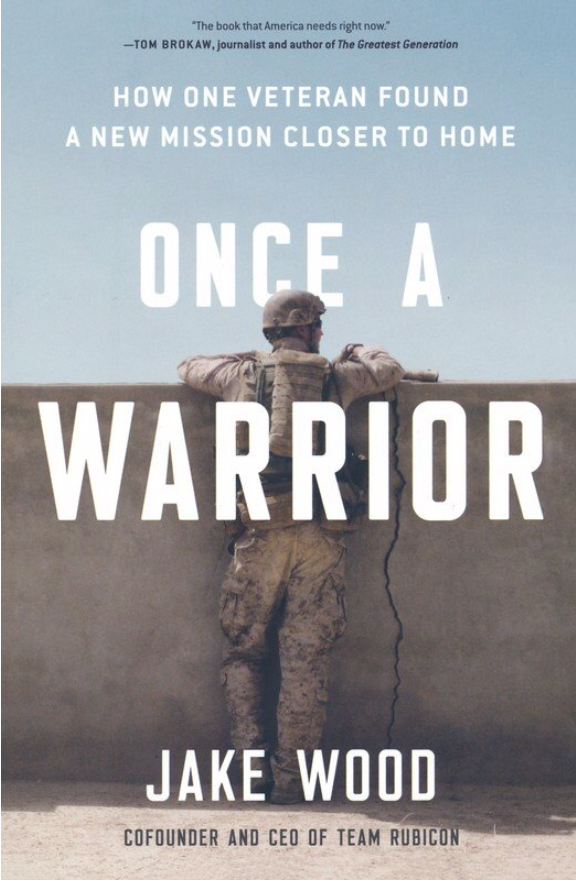