Shellandshilo1956 said:
I see John and the squirrel. Which one are you?
Click to expand...

he's taking the photo of me playing with a puppet
S

johnsmith said:
he's taking the photo of me playing with a puppet
Click to expand...

Not an option John. Are you saying DDH is the puppet. My thoughts exactly.
Last edited: Oct 18, 2020

One more time for the dim witted morons


johnsmith said:
You get to ask the question, what you don't get to do, is to dictate the answer.
Click to expand...

Shellandshilo1956 said:
Not an option John. Are you saying DDH is the puppet. My thoughts exactly.
Click to expand...

and Shell is the peanut :monkey winks

Shellandshilo1956 said:
Why don't we just start shooting all interstate trespassers on sight? Are we just assuming that these 17 Kiwis ARE infected? Are we assuming that only Kiwis can be infected? Are we assuming that if they go to Victoria, that they will be infected? And, are we just assuming that if they come to Queensland. that they WILL infect and kill Queenslanders? Awful lot of stupid assumptions being made here. Considering the fact that less than 1% of the 5.5 Million Australians tested for Cov-19, were positive. And, that over 99.9% of all Australians are not even infected. This is just more irrational fear-mongering, for the ignorant sheep, who wouldn't know a virus from and anus.

As I've said before, this crisis has now become only the means justifying the cause. And, NOT the cause to justifying the means. Does any rational mind here, think that we can actually close down an entire land border? Insane.

FFS, it is the people who ARE supporting, enabling, and condoning government intervention! Other than beefing up emergency services, treating patients, providing hospitals with more resources, educating the public, and providing funds for vaccine research, government should just leave people the fuck alone.
Click to expand...

I think you miss the point. What point..?

You, aka Kiwis , that arrived here, shouldn't scatter to the four winds, .
No there are no reasons to think they are infectious... Not the POINT.


It is about RESPECT.
or the lack there of.
S

"Well Shell, look what happens when the Feds and NSW let kiwis into New South Wales. Yeah? 17 of them hop on a jet to Victoria.
And apparently aren't coming back.!! Vic govt claims they don't know where they are. NSW ? WHO US what ?? WHAT?

So much for managing borders, its a fucking joke. Half or more, maybe all of those Kiwis are right now heading for QLD. FFS. PEOPLE... are so stupid, they necessitate government intervention.".

You said that the the Government allowed Kiwis into NSW. And, 17 of them went to Victoria, and may chose NOT to come back to NSW. You then said, that the Victorian Government, or any other State's governments, CLAIMS not to know where they are. So, why would any government need to be tracking these 17 Kiwis? Are they escaped criminals? Have they committed some crime? Are they a threat to themselves or others? Or, are they illegal immigrants? What? What? Why should they NOT be allowed to "scatter to the four winds"? They are NOT prisoners!! Are you saying that since the Government has allowed these Kiwis into NSW, that they should show their respect for the government's kindness, and stay where the governments puts them? Please tell me, that ain't what you're saying?

Are you saying that it is because of social disobedience, that necessitates government intervention? That if we all just do what we're told, the government will leave us alone? Sorry, some of us chose NOT to exist as sheep. Some of us will be the source of change, and the guardians of our freedoms.


pinkeye said:
You, aka Kiwis , that arrived here, shouldn't scatter to the four winds, .
No there are no reasons to think they are infectious... Not the POINT.
Click to expand...

If there is no reason to think that these Kiwis are infectious, then what is your point? Why can't they go anywhere they like? The Government is not a person whom you must show respect for. It is a political system, used to control and define what is in the best interest of the people it serves. You might show support, or approval for its polices. But it has nothing to do with respect. Should you show respect for Capitalism, or for the free market system?

But hey, I might be just missing your point.

It's about respect for each other.

Not really worth going to war about. Just seems a touch arrogant.. S'pose it depends on what they were told.
Whether they were told to remain in either NSW or NT, or NOT.

Just a typical example of failure to communicate between levels of Government.

johnsmith said:
he's taking the photo of me playing with a puppet
Click to expand...

Lol, Johnny got his ass handed to him

MilesAway said:
Do humans get fleas,lol!

get it right miles, humans have fleas

DonDeeHippy said:
get it right miles, humans have fleas
Click to expand...

The U.S. government today added Ahmed Luqman Talib to its list of designated terrorists. Talib is an alleged al Qaeda facilitator who operates a gemstone business based in Australia. That business, Talib and Sons, has also been designated.

Staff member
Gem dealer is a good cover I suppose. What actual evidence they have, who knows?

HBS Guy said:
Gem dealer is a good cover I suppose. What actual evidence they have, who knows?
Click to expand...

The intelligence community probably doesn't want to reveal it's "sources and methods."

Who the Fu needs to know they were a gem dealer?
S

We are worried about ONE gem dealer in Australia? Really? Maybe the US will launch a drone strike and take this US-designated terrorist out. They can just make up any story they want, just in case a few Australian customers get taken out as well.

Saudi Arabia is a state-sponsor terrorist country(also the US and the UK). It is the worlds largest source of funds, for Salafist jihadist and Wahabis terrorists group(al Qaeda, Taliban,, and terrorist groups in Iraq and Syria). Yet the US turns a blind eye to Saudi Arabia's human rights abuses, and its funding of terrorists. The US even have a treaty with Saudi Arabia(the Mutual Defense Assistance Agreement), to protect them, and sell them 100's of billions of dollars in arms. And, we have the nerve to cast aspersions, to demonize one gem dealer in Australia? Really?

In reality, you are many more times likely to die from a croc bite, or from stress, than from ever becoming a victim of any terrorist attack. But, where fear exists, logic fades. 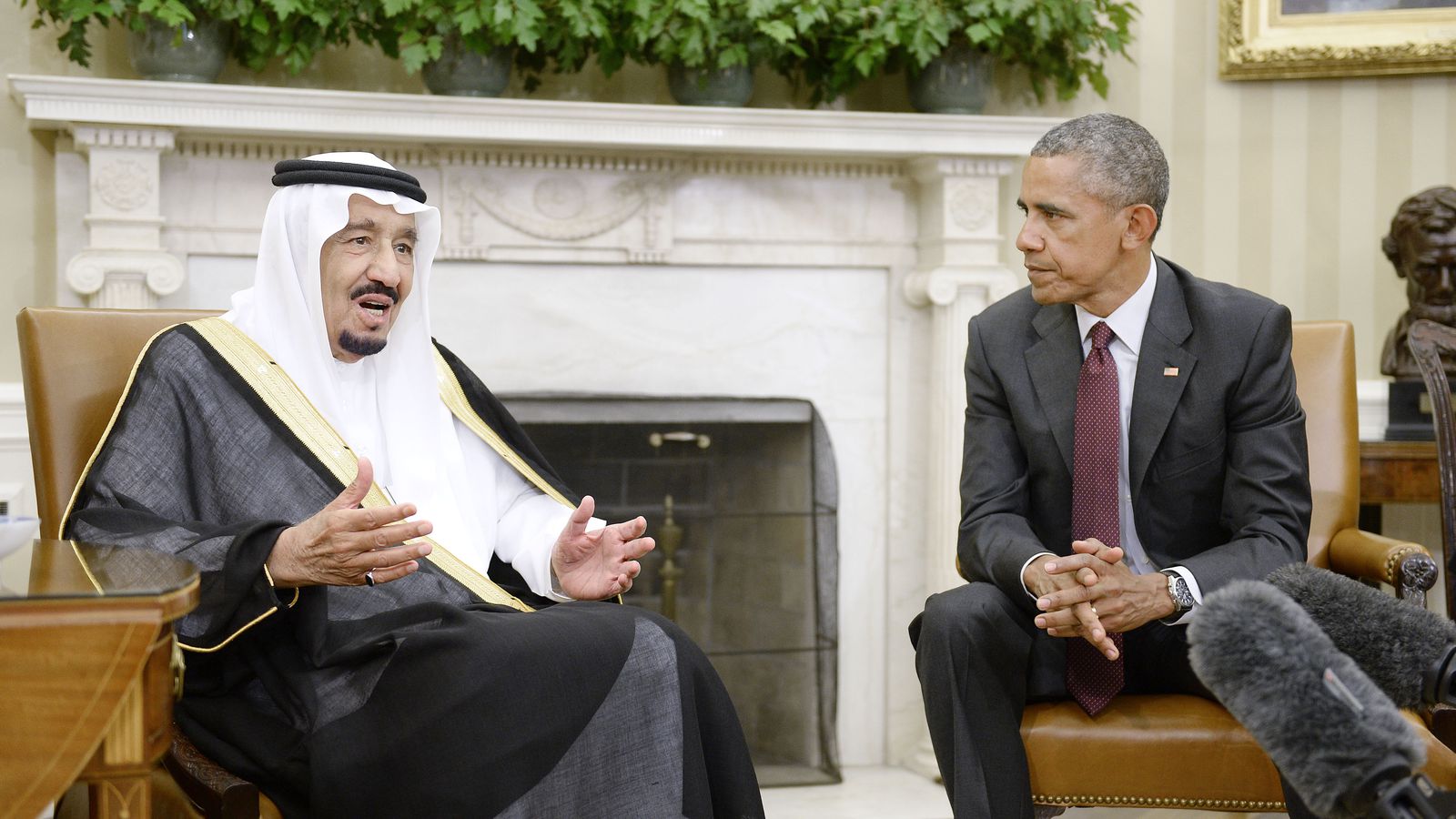 Beyond oil: the US-Saudi alliance, explained

The US-Saudi alliance began with oil. But it's become about much, much more.

Like when you constantly fear the Government are eroding and taking away you rights... what a crap way to live......
S

DonDeeHippy said:
Like when you constantly fear the Government are eroding and taking away you rights... what a crap way to live......
Click to expand...

Would you like me to list all the things that you COULD DO at the beginning of the year, and then list if you can do those same things now? It is NOT a constant fear of our rights being suspended or eroded, because less than 1% of the population is infected. It is a reality that you need to keep making excuses for. That is, unless, you've just awoken from a 7 month dream. Do you really think that our individual freedoms and rights, have NOT been suspended/or eroded? YES or NO?

The only thing more crappy than living in a society where the government controls all individual freedoms, is living in denial and abject ignorance.

DonDeeHippy said:
Like when you constantly fear the Government are eroding and taking away you rights... what a crap way to live......
Click to expand...

HBS Guy said:
Gem dealer is a good cover I suppose. What actual evidence they have, who knows?
Click to expand...