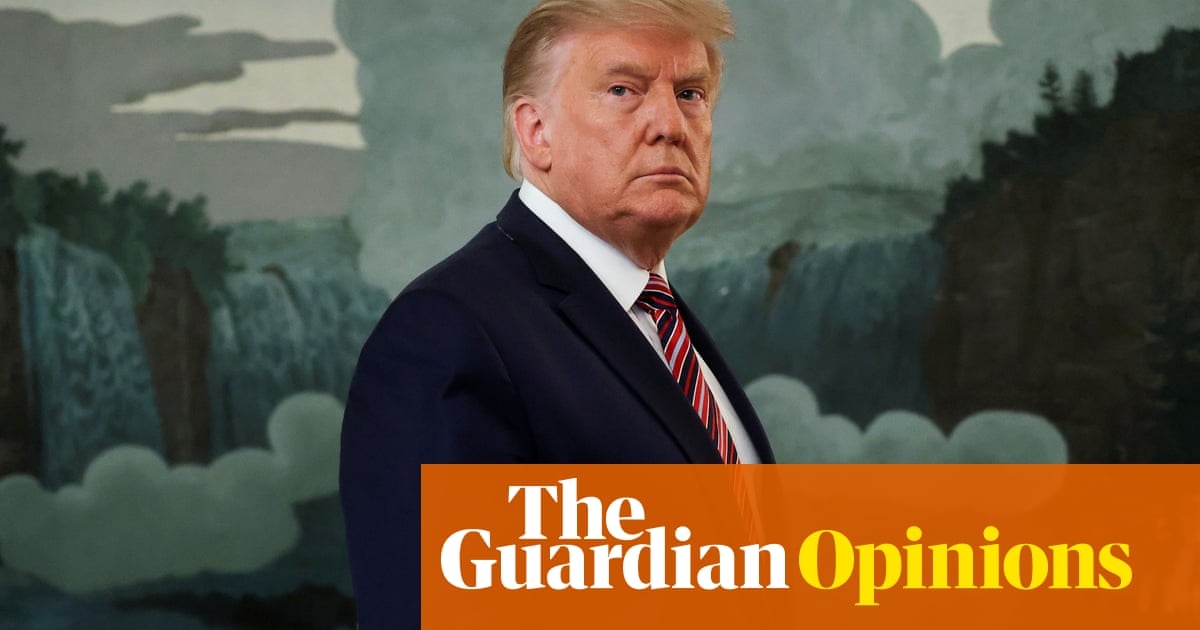 Trump told a reporter his biggest secret: that he is a danger to the American people | Richard Wolffe

Trump is a particularly stupid man who thinks he is very smart. Perhaps this lies at the root of his monumentally dumb decision to grant Bob Woodward 18 interviews

The Inuit are supposed to have dozens of words to describe snow. The Brits have endless ways to talk about rain. Now it’s time for Americans to delineate all the many ways that Donald Trump is dumb.
If Bob Woodward’s new blockbuster teaches us anything new about the character of the 45th president, it’s that we don’t yet have the words to describe the multiple variants of the vacuum inside his head.
There’s the stupidity of arrogance, the stupidity of ignorance and his old friend: the stupidity of blatant duplicity. There’s his homicidal stupidity, his traitorous stupidity, his criminally corrupt stupidity and his plain old infantile stupidity.
Let’s start with the top of this taxonomy: the domain of Donald’s dumbness. At his core, the former reality TV star is a particularly stupid man who thinks he is very smart. Or as he prefers to call his own character, “a very stable genius”.

good article. Pity the trumpards will ignore it and continue to support the wanker

MilesAway said:
Who's your hero Johnny boy?
Click to expand...

You mean the twin headed fascists?

johnsmith said:
hey ... I'm the sheriff in these parts ..

thats enough beer for you for one night

johnsmith said:
thats enough beer for you for one night
Click to expand...

f off ya fascist tryhard : no one believes ya schtick

What's wrong with you?

greggerypeccary said:
What's wrong with you?

johnsmith said:
good article. Pity the trumpards will ignore it and continue to support the wanker
Click to expand...

Well I saw that on the teev... he believes he is the Godfather FFS.!
What a disaster for America.

greggerypeccary said:
What's wrong with you?

No death in me mate: bye bye punk!

The president has previously suggested the recent surge in wildfires was attributable to poor forest management, rather than record levels of heat and drought, as climate experts have said.


“I wish science agreed with you,” Crowfoot replied.

In his August conversation with Bob Woodward, Trump was also clearly more focused on the US economy than Americans’ health.

In the audio released by CNN, the president asks Woodward, “So you think the virus totally supersedes the economy?”
”Oh, sure. But they’re related, as you know,” Woodward replied.

“I mean, more than a little bit. But the economy is doing -- look, we’re close to a new stock market record,” Trump said.

When Woodward told Trump that there were parts of the book he would not like, the president again said, “You know the market’s coming back very strong, you do know that.”

“Did you cover that in the book?” Trump asked.


And Trump goes on about the mental capacity of Biden

Vindman replied, “President Trump should be considered to be a useful idiot and a fellow traveler, which makes him an unwitting agent of Putin.” By “fellow traveler,” Vindman said he meant both Trump and Putin oppose many democratic norms.


“They may or may not have dirt on him, but they don’t have to use it,” Vindman said, when asked if he thought Trump was being blackmailed by Putin.


“They have more effective and less risky ways to employ him. He has aspirations to be the kind of leader that Putin is, and so he admires him. He likes authoritarian strongmen who act with impunity, without checks and balances. So he’ll try to please Putin.”


Vindman went on to say, “In the Army we call this ‘free chicken,’ something you don’t have to work for—it just comes to you. This is what the Russians have in Trump: free chicken.”

What a horrible woman.