Staff member
You cannot ban abortion, DRAH. You can make rich women fly to a progressive country for an abortion and you can swap safe abortions for backyard abortions. Women will die.

HBS Guy said:
I have never mentioned that
Click to expand...

So you are not confirming?

Staff member
I do not know, DRAH. A court case was started but the action was dropped.

Trump is selfish, immature, narcissistic, vain, stupid but there is no legal evidence re pedoophilia. I would not even call him an “alleged pedophile.” He has done immense harm to the US, stuffed up their response to the COVID19 virus and if re-elected there will be a war with Iran and US soldiers could well get sucked into that. Seth disagrees but I think he wants to overlook evidence.

Yes. Even in Virtually covid free Queensland. The Cabs smell like a sanitizer factory, so much of that is used.

There is no 'merge thread' option there.

HBS Guy said:
I do not know, DRAH. A court case was started but the action was dropped.

Trump is selfish, immature, narcissistic, vain, stupid but there is no legal evidence re pedoophilia. I would not even call him an “alleged pedophile.” He has done immense harm to the US, stuffed up their response to the COVID19 virus and if re-elected there will be a war with Iran and US soldiers could well get sucked into that. Seth disagrees but I think he wants to overlook evidence.
Click to expand...

But he IS an alleged child rapist.

greggerypeccary said:
But he IS an alleged child rapist.

You wanna see the court documents again?
Click to expand...

MilesAway said:
I/ we all note your best mate Aussie has no opinion on the matter

It's not a matter of opinion, though - it's a simple fact.

Donald Trump is an alleged child rapist, and there are affidavits and witness statements lodged with a New York court that prove it.

It has absolutely nothing to do with anyone's opinion. 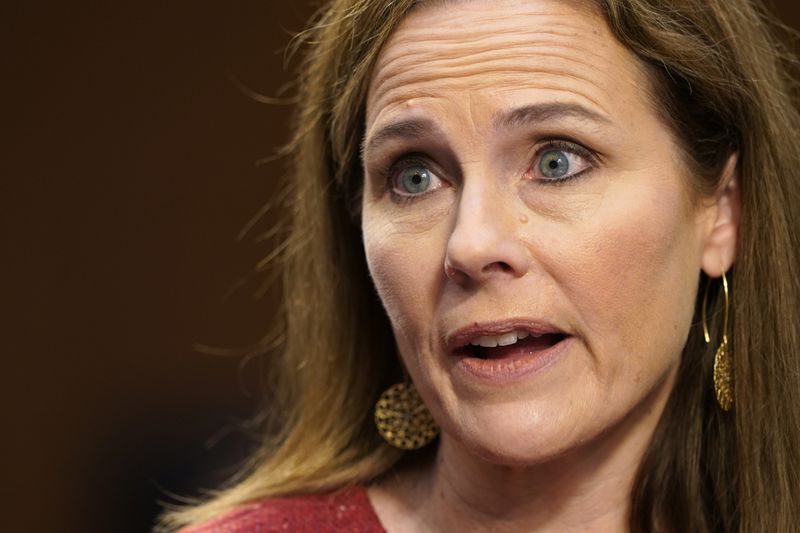 While Amy Coney Barrett’s has been sworn in as the Supreme Court’s newest justice, much of the progressive establishment seems determined to treat her as illegitimate. The Girl Scouts Twitter account has even scrubbed — presumably due to a backlash — a tweet congratulating her as the fifth woman appointed to the high court.

Barrett’s appointment, possibly the last hurrah of Donald Trump’s presidency, has been a humiliating episode for the Democrats, who could do nothing to stop her despite strenuous objections. But trying to unperson her would be a big mistake for progressives and feminists, especially since their attacks on Barrett during the confirmation process may have already backfired.

Procedurally, the Democrats have a strong complaint. Claiming that Barrett’s seat is “stolen” may be hyperbole, but the fact that the Republicans blocked Merrick Garland’s election-year appointment in 2016 and then rammed through Barrett’s confirmation has to offend any nonpartisan sense of fairness. (Democrats bear their share of responsibility for the judicial wars, but the Republicans' power grab here has been especially naked.)

And yet a Politico/Morning Consult poll last week a poll found that 51% of Americans believed Barrett should be confirmed — up from 37% last month.

Undoubtedly, the shift was partly due to Barrett’s impressive performance at the hearings. But it was also a likely backlash against over-the-top attacks, both from Senate Democrats and from mainstream media figures.

First, there was the push to portray Barrett, a federal judge and former Notre Dame law professor, as a stealth religious fanatic out of “The Handmaid’s Tale,” the book and TV dystopia in which America is ruled by a misogynistic cult. The only connection seems to be her membership in an ecumenical Christian group, People of Praise, in which some women hold a (leadership) post formerly called “handmaid.”

While the group endorses male spiritual headship — a complicated concept many religious communities understand as service, not dominance — a 2018 post on its website stresses “mutual love and cooperation” between spouses.

The woman Americans saw when Barrett accepted the nomination was clearly no patriarchal puppet. She hailed the late Ruth Bader Ginsburg as a feminist pioneer. She praised her husband, Jesse Barrett, as a partner doing “more than his share” at home. The misogyny seemed to come from Twitter leftists who ridiculed Barrett — a mother of five biological and two adopted children — for her “clown car vagina.”

Then, Barrett got slammed for saying she doesn’t discriminate based on “sexual preference.” Detractors claimed that the term, supposedly implying choice rather than innate orientation, was not only dated but a “dog whistle” signaling anti-gay views. Yet a Google search of scientific literature shows nearly 5,000 mentions of “sexual preference” in 2019-2020 (outnumbered by “sexual orientation” with about 20,000, but hardly unusual). There are very recent examples of the phrase being used in the LGBT press — and by Democratic presidential candidate Joe Biden.

Nonetheless, the attack was picked up not only by the press but by two Democratic senators, Hawaii’s Mazie Hirono — who called Barrett’s language “outdated and offensive” — and New Jersey’s Cory Booker. When Barrett apologized, Vox magazine chided her for failing to realize she had used “harmful language.”

Others targeted Barrett’s “originalism,” the philosophy which holds that the Constitution and other foundational laws should be interpreted according to their text and their framers' intent, not current social norms. Left-wing Twitter suggested Barrett was a hypocrite since women couldn’t be judges when the Constitution was written, or that she wants a return to the days when Black Americans lacked human rights. (Of course, “originalism” includes constitutional amendments and congressional legislation such as the Civil Rights Act.) During the confirmation vote, Sen. Ed Markey (D-Mass.) blasted originalism as “racist,” “sexist” and “homophobic.”

There are, of course, real questions about whether Barrett will tip the Supreme Court against abortion rights. (Some constitutional scholars, such as Princeton’s Keith Whittington, believe she may well defer to precedent on Roe v. Wade; Neil Gorsuch and Brett Kavanaugh are even more likely to do so.) There are questions about the Affordable Care Act (which she will probably help uphold). There are, pressingly, questions about a potential election dispute. But much of the rhetoric about this assumes that, as a Trump appointee in a “stolen” seat, Barrett — rated “well-qualified” by the left-tilting American Bar Association — must be a political hack. Gorsuch and Kavanaugh have defied similar expectations.

Barrett’s record as a federal judge is complicated. Some of her opinions (one in an immigration case, another on a dubious criminal conviction) suggest excessive deference to government; others side with civil liberties against police powers.

At this point, no one knows what Justice Amy Coney Barrett will be like. Many of us will undoubtedly have cause to criticize her. But let’s wait to criticize the real Justice Barrett, not a progressive bogeywoman.
Click to expand...

She will never succumb to the childish, butt-hurt whinging coming from an outclassed democ-RAT minority, & they will have to eventually come to grips that she's firmly on the Court, & will affect the decisions of countless cases brought before the Court for decades to come......

Aussie said:
There is no 'merge thread' option there.
Click to expand...

There is a “Move thread” menu item but that is not it.

Click in the little square to the right of “Report Edit Delete IP Warn” Click “Select all” down at the bottom of the screen, click on “Choose action. . .” and select Merge posts.
A

Enjoy your short-lived victory because when the Democrats win a landslide, they'll 'expand' the court, creating a progressive majority.

I'd say 15 justices in total should do it. A comfortable 9-6 majority.