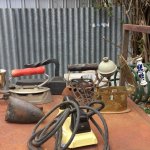 The all–grey one at the back is SOLID IRON!

In front of that TWO irons with a tank for methylated spirits or kerosine (no sure which, people mention metho but I have read mention of kerosine.) One of these, the one with the red handle, is in pretty good nick (appearance only, don’t know and don’t care if it all still works!

Leaning against the more buggered up metho burning irons is an iron trivet to rest the iron on. Next to the trivet is the type of iron where you poured (I assume) hot coals into the container then close and latch the lid—kept the iron hot for longer. On the other side is the little curved iron I got—still have no idea what that was for.

Finally we have an electric iron, dunno, 1940s or 1950s?. Hoping Lols can find me a very early electric iron (cord not essential unless it is the sort that plugged into the light—electricity was originally rolled out to light homes.

Detail—latch on the live coal iron:

Notice both the live coal and the two metho burning irons have holes near the top of the sides? Both needed air to keep coals/metho burning.

Staff member
BTW—I suspect the iron using the live coals is not genuine. It does not have the thick base plate ALL irons have, even electric. Might remedy that Saturday week.

I love the progress, the history of technology.

Housemaids as young as 14 were given, even as late as 1905, 8 pints of porter a day as part of their wages—needed it. But—how many housefires did tipsy housemaids with irons burning metho or full of hot coals start?
Last edited: Sep 4, 2020

Oh wow, didn’t realise this post on irons was going since last month. Sorry I missed it. Been a bit of a heavy time with legal affidavit etc and it’s draining. So it’s nice to see this post on irons. That Hunted and Collected place on Canterbury Road, Kilsyth is brilliant, sooo many things from sooo many different people selling in their little cubicles. It’s just awesome walking through this factory size place to see it all. I couldn’t resist, I bought a beaut 1970s copper fondue set. I think I like 1970s stuff... I have these stoneware plates I use everyday, I found they are worth quite a bit each on eBay, yet I like to keep using them, so hardy, don’t chip, can put in microwave. I even love old 1970s cook books. I’m into 1970s copper and brass ornaments and trinkets. Just something about it. Maybe coz I married in 1976

I would REALLY love a really early electric iron—next time you are there maybe?

Next thing I reckon—the sort of plugs people would add to a light in place of a globe with a socket to plug a cord in and a place to put the globe in—first rollout of electricity was just for lighting homes. electric vacuums cleaners and smoothing irons soon arrived with fridges taking longer, I think. Radio too was early—when was Bakelite invented?

Staff member
I want to make my kitchen an interesting, pleasant place, not wanting to turn into the sort of old fart who eats takeaway junk food.

I have some copper—a big kettle, a dipper, a tray and a copper vase chased with silver set with garnets. Then some interesting old tins. Also a huge Aesthetic Movement meat plate I will hang on the wall: fuck but they used to eat so much meat!

Photos in a jiffy.