Staff member
Your EV could also store excess solar, feed it back later (leaving enough charge for a weeks commuting.) 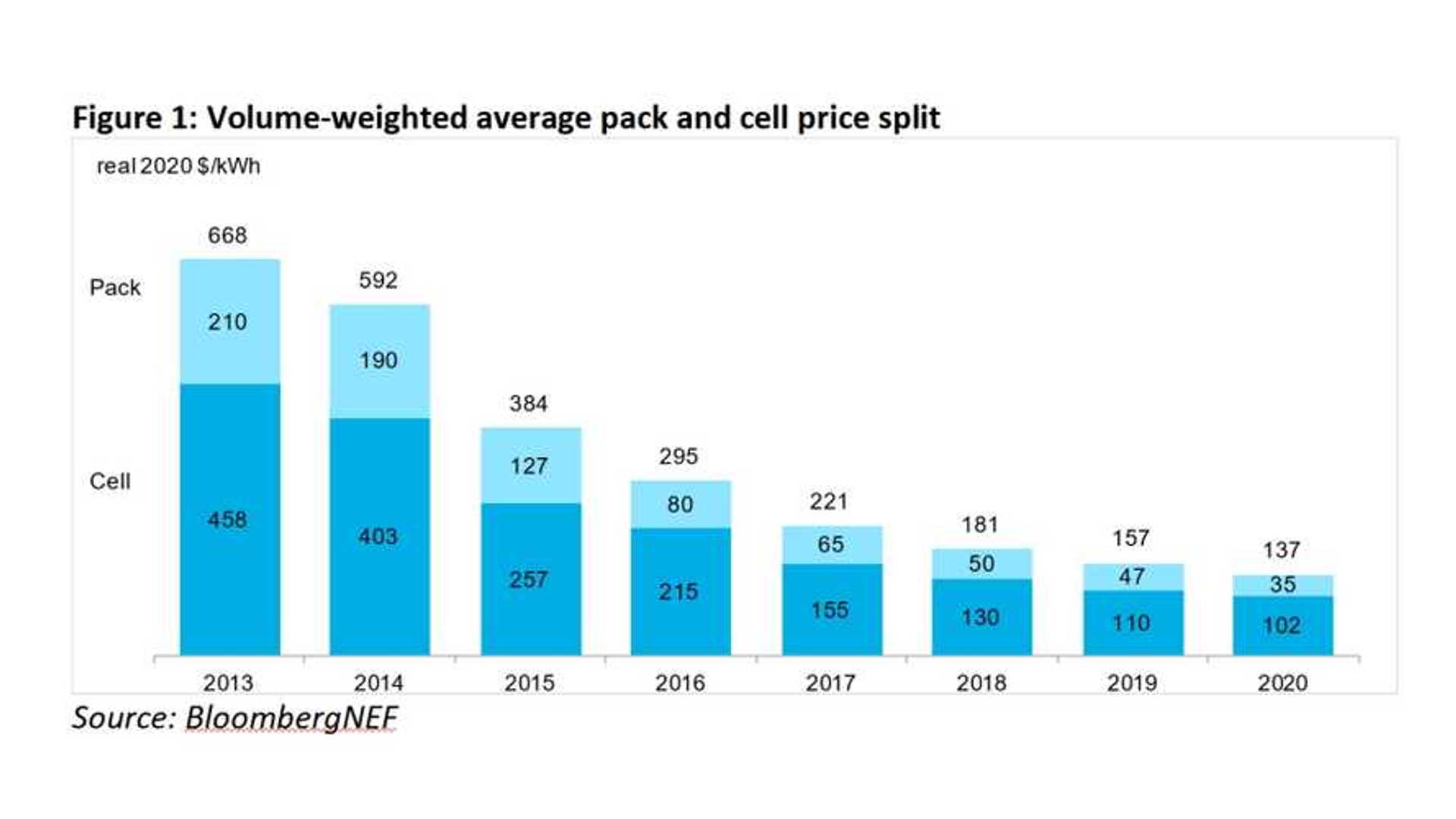 According to BloombergNEF, 2020 was the first year in which a battery pack cost less than $100/kWh. On average, though, the price is at $137/kWh.

insideevs.com
In 7 years the average cost of 1kWh in a battery pack for a EV has gone from $668 to $137 USD....
The magic point most experts agree on is $100 for price parity with a ICE vehicle..
.Of course this price will keep going down, Tesla released it's own battery in September that will be 50% cheaper than the ones they are using now... very exciting times.....

In a tweet, Mr Musk said he reached out to Apple chief executive Tim Cook "to discuss the possibility of Apple acquiring Tesla (for one-tenth of our current value). He refused to take the meeting".

Mr Musk said he sought out the meeting with Mr Cook "during the darkest days of the Model 3 program", a reference to Tesla's first electric car designed for the mass market.
Click to expand...


I bet someones kicking themselves

Apple has announced its own electric car scheduled start 2024-5 delayed by Covid.

Here is a picture: 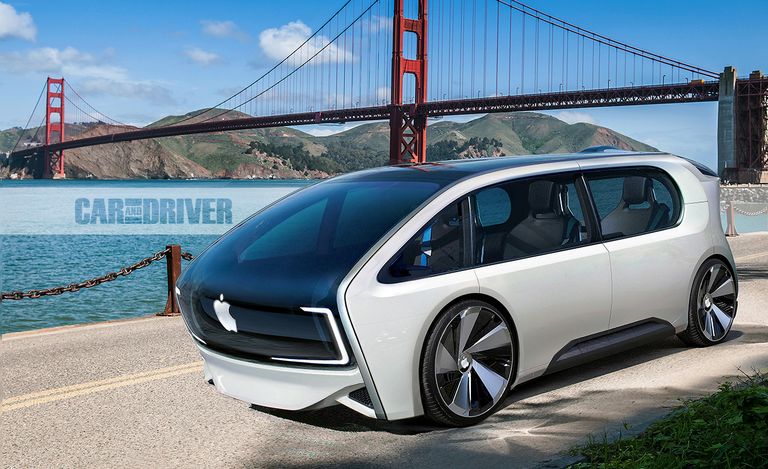 I wonder what a 'Roo , hitting the front, full -on would do to this sort of prospective electric vehicle.
(probably be bounced off)

There is an old saying which covers the issues for an electric vehicle future.

Staff member
On a nice 20°C day it will be 40°C+ inside that greenhouse on wheels. You would think car makers would have tackled that problem by now? Use the heat to drive a ventilation system?

Apple will develop its own self-driving technology, with a view to putting an electric car with “breakthrough” battery technology on the market by 2024, it has been reported.

The news, from a Reuters story citing several unidentified sources, raises again the oft-times rumoured “Project Titan” that has been in and out of the news for some years now.

As far back as 2015 the Wall Street Journal reported that Apple would ship an electric car in 2019, however the project has reportedly progressed unevenly. An Apple-made and designed electric car was put on hold and Doug Field, an ex-Tesla employee and Apple veteran returned to oversee the project in 2018.

A crash in 2018 involving a Lexus driving with Apple self-driving apparatus – which was ironically rear-ended by an electric Nissan Leaf – confirmed that Apple was working on autonomous technology. Since then further updates on Apple’s project have been thin on the ground.


This time around, it appears the reports are more substantial.

Reuters reports that “two people familiar with the effort said, asking not to be named because Apple’s plans are not public” that Apple’s project has now progressed to the point it will build its own electric car, with autonomous driving technology that would take on the likes of Tesla’s FSD (Full Self-Driving) and Google’s Waymo.

Importantly, the reports make mention of a “radically” new battery design that would reduce the cost of batteries as well as increase driving range, according to someone who says they have seen Apple’s battery design.

This is not only cheaper to make than the typical nickel-manganese-aluminium (NCA) chemistry of today’s lithium-ion batteries, but is also less likely to overheat.


“It’s next level,” the person was quoted as saying of Apple’s battery technology. “Like the first time you saw the iPhone.”

Who will make the Apple car is less clear. Reuters reports that Magna International – which has just inked a deal to make the Fisker Ocean in Europe – has previously explored a partnership with Apple but this fell through after Apple’s plans became unclear, a person familiar with those previous efforts told Reuters.
Click to expand... Sources say Apple will put an electric car with self-driving and "breakthrough" battery technology on the market by 2024.

Sources say Apple will put an electric car with self-driving and "breakthrough" battery technology on the market by 2024.

Sounds fake...apple was doing a car project and fired everyone a few years ago... besides apple had to stop because they realized once inside, you need to use windows to look outside......

Staff member
We will see. Not buying Tesla was a stupid mistake for sure.


I bet someones kicking themselves

Both Toyota and merc bought Tesla shares in the beginning as well and sold early..... merc would be worth double what it is now if they didn’t sell....

HBS Guy said:
We will see. Not buying Tesla was a stupid mistake for sure.
Click to expand...

Yup in a few years Tesla will be the richest company in the world, already in the top ten

Tesla have done it again.....
Yesterday they opened orders for the China Build Model Y... for the last 9 months they have been making the factory for it.
The Model Y is a medium sized SUV...
Reports so far have showed around 100,000 orders in the first day.....this Is amazing.... the cheapest one will be around $80,000 AUD so that's at least 8 billion AUD in the first day of sales....

Seven countries are banning the sales of new petrol and diesel vehicles by 2030:

probably the biggest impact here would be Germany....

DonDeeHippy said:
probably the biggest impact here would be Germany....
Click to expand...

All of Germany's taxi's are Mercedes .... Has Merc got an all electric version at a reasonable price? Keep in mind, Mercs are reasonably priced in Germany ... it's only in Oz that we pay a fortune for them

johnsmith said:
All of Germany's taxi's are Mercedes .... Has Merc got an all electric version at a reasonable price? Keep in mind, Mercs are reasonably priced in Germany ... it's only in Oz that we pay a fortune for them
Click to expand...

Tesla is building a factory in Berlin and making their Model Y there, a perfect SUV taxi...... cheaper and lots more range than the Merc....
End of this year they are hoping to make the first ones there....before then Germany will get the USA made ones but import and shipping will make them more expensive...
Netherlands have big Tesla taxi companies at airports and are really doing well and lots cheaper to run....
VW are starting to make some good ,well priced EV's now and they might replace Taxi's as well...
Last edited: Jan 2, 2021

The growth is just incredible.....