DonDeeHippy said:
ahh so a EV Van would be no probs range wise.... Just initial cost and availability....
Click to expand...

Maybe, I don't plan on doing this job long term so it's not going to happen for me.

johnsmith said:
Maybe, I don't plan on doing this job long term so it's not going to happen for me.
Click to expand...

it's all academic anyway, none of these van are in Australia yet . When people realize just how cheep it is to run EV's, things will change, there is no real servicing to be done either.....Also never have to go to a gas station again....

DonDeeHippy said:
it's all academic anyway, none of these van are in Australia yet . When people realize just how cheep it is to run EV's, things will change, there is no real servicing to be done either.....Also never have to go to a gas station again....
Click to expand...

you'll be able to buy Aussie made ones from next year ... from about $40k

but these look a bit small for most couriers ... they'll need to bring out a full sized van to get any real traction

johnsmith said:
you'll be able to buy Aussie made ones from next year ... from about $40k

but these look a bit small for most couriers ... they'll need to bring out a full sized van to get any real traction
Click to expand...

yeah I saw those, in Europe, there are a few companies making full sized vans now....

How ridiculous that people have to wait till 21 Jan 2021

Shouldn't the President now be required to act as a caretaker, with NO NEW initiatives.?

Staff member
He is still officially the President, none of the procedures to finalise the election outcome have started yet.

Another good reason for Americans to bring their Laws into the 21st Century.
S

Lets just forget about actually stopping a virus that has been around long before man. And, will continue to be around long after man. It is our immune system that in the end, will fight this virus. And, in the end, it will be our immune system, that will make us immune to this virus. Any mechanical method(distancing, wearing masks, etc.) is just useless, as the evidence clearly demonstrates.

There are 19,500 cities, towns, and villages in America. This means that an average of 12.4 people/city, towns, villages, have died so far in the US from this virus. Is it possible that most of these people were elderly, fighting some other chronic illness, or had an already compromised immune system? Of course, but this information is always suppressed, and NOT mentioned. How about the number of people who HAVE survived from this viral infections? How many in the US have recovered so far? Do you even know? Why is this never mentioned! Spewing out figures like 10,058,586 is only half the truth. The whole truth is that this figure ignores the total number of those who have recovered. With a mortality rate in the US of 2.4%, this means that 97.6% of those infected will recover. Therefore, 10,058,586 people infected x .976 = 9,817,180 people will survive this virus. 9,817,180 people will also become immune to this virus. Ignoring these facts is just more spreading of disinformation, and fear-mongering.

Therefore, out of the 132,540 new infections, 129,359 people will survive. The number of new deaths, is totally unrelated to the number of the new infections. Or, it would be over 3,000 deaths. Not sure why it was even mentioned. More fear-mongering I guess. Did you mention that 2.7M people die each year in America from other causes(8.9% by covid-19)? Of course not!

What we will eventually see happening, is that as more and more people become immune to this virus, the less and less people will become infected by this virus. This is the pattern of all viruses. Had this virus not been so sensationalized and hyped, you would have never even known about it. Nothing in your normal routine would have alerted you. And, we would have survived it, as we have survived all the other viruses for the last 60 years. It is also sad, that the best covid-19 policy, that all the government brains could come up with, is to keep 26M people 2 meters apart from each other. That is the policy of a 5 year old. Not a government!

In Australia, with a population of 26M people, we are talking about 2,375 people still infected, and 907 elderly people dead from being infected. Really? Is this enough reason to close down borders, force people to distance themselves, end employment for a million Australians, close down industries and businesses, and suspend the individual rights and freedoms of 99% of the population? This is as close to martial law as you can get. And, we are NOT at war with anyone. Am I the only one seeing, that the king is NOT wearing any clothes?

Staff member
Simplistic. Not just old people and some young people who had it and survived will have health problems for the rest of their lives.

Social distancing and masks reduce the spread of respiratory viruses. I will buy a pack of masks to wear when buying petrol etc in Vic on my way to/from Pt Melbourne and use hand sanitiser.

Well, perhaps you are Shell. Victoria is now Covid-19 free for days. You ae saying the same thing would have happened if NO limitations applied, OR...

YOU are saying what's a few thousand extra dead here or there, especially old people, to get mob immunity.

So we KNOW NOW that the MOB immunity theory is fallacious..... in relation to THIS virus...
and we KNOW that Victoria has gone from virulent infections.. to zero.. through community interaction restrictions.

You still insist you are correct.

So anyway,
over 1000 people a day are dying in the US alone, from the virus.

( I am not forgetting the thousands of others dying around the world today, but that is A GIVEN, isn't it.? ) It has become accepted it seems. Else.. what ...?

Forget about the US election... that's done.

THEY MUST take strong action, BUT, given the stain, the black black stain of Trump, PEOPLE aren't invested.
They can't tell fact from fiction, and they're going to die because of it.
S


pinkeye said:
You still insist you are correct.
Click to expand...

I don't insist that I am correct!! It is science, biology, physics, math, and a whole lot of common sense, that insist that I am correct. And, since you are not challenging, correcting, or disputing any of the facts that I have deposited, I KNOW that I am correct. But, if innuendos, misrepresentations("YOU are saying what's a few thousand extra dead here or there, especially old people,.."), deflections, and logical fallacies, are your only tools for discourse, then clearly you are not interested in the truth. Conformity, obedience, and rationalizations are the only tools protecting your emotional security blanket.


pinkeye said:
So we KNOW NOW that the MOB immunity theory is fallacious..... in relation to THIS virus...
Click to expand...

How do we know now that HERD Immunity is a false theory? Because you say so? It is an indirect/intuitive form of protection from the virus. If enough people in the populations are infected by the virus, that will leave fewer and fewer people in the population to become infected by the virus. This is a fact. So, is this wrong? Or, do you just disagree with it? If so, HOW and WHY? 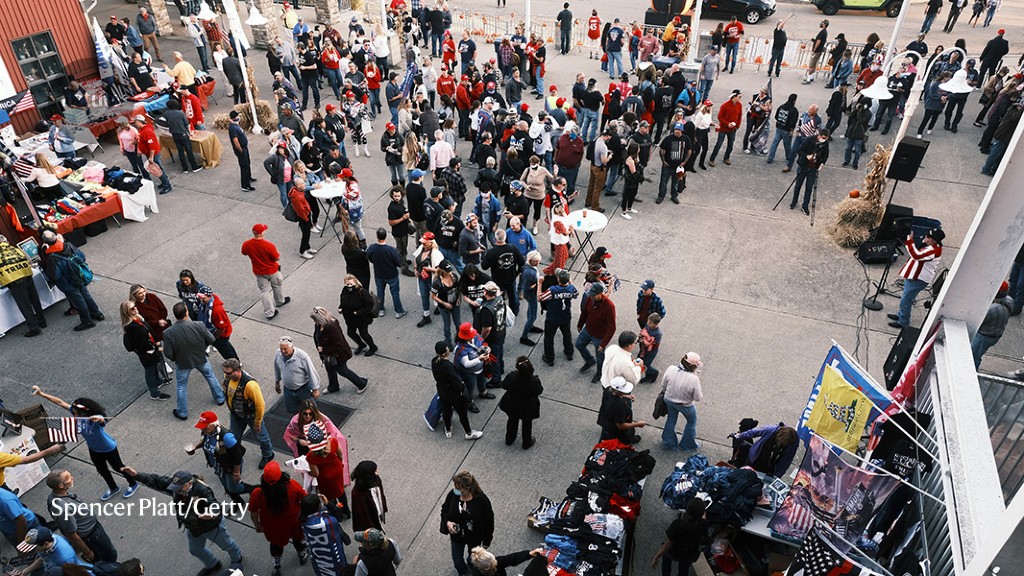 The false promise of herd immunity for COVID-19

Why proposals to largely let the virus run its course — embraced by Donald Trump’s administration and others — could bring “untold death and suffering”.

What we should have done, was to isolate those people in the population who are the most at risk of dying. The elderly over 70(in nursing homes, aged facilities, and home care facilities). Those suffering from other chronic illnesses. And, those with already compromised immune systems. Also, to Increase funding resources to hospitals and treatment facilities, medical aid workers and health professionals, public education, and vaccine research. Just as we have done for the last 60 years.

Look, death is a vital/tragic part of the cycle of life. It is a fact, that our immune system will becomes weaker as we age. In fact, our entire body organ system will become weaker as we age. Our deaths has been programed in our genes since birth. We can actually read the centriole number on the mitotic spindles, and can determine the date of our death(by natural means). Viral infections, chronic diseases, and accidents, only speed the cell division process up.

Some of the clear points that I have tried to raise were,

That the deaths from this virus, represents only the tiniest fraction of 1% of the total population. This has nothing to do with how I feel about those deaths. Even if left unchecked, it would take centuries for the entire population to become infected(herd immunity).

That the government was only spewing out disinformation, half-truths, and sensationalized hype, to justify its immature response to this virus. Over 95% of infected are recovering. And, those dying are the elderly, or have an already compromised immune system.

That no one can protect themselves physically from a virus, no matter what they do. Only our immune system can do this.

That this so-called pandemic is not worth closing down a country, and isolating 99% of the population who are NOT even infected.

That we are becoming sheep, and the government is becoming our shepherd.

There is nothing I can say to open a closed mind. Ignorance can be its own bliss for them. My comments are for those who are still able to think laterally, and interpret the facts in their proper context. People who just don't select only the facts that they want, and dismiss the facts that threaten their narrative. People that want to know the whole truth, rather than only the half-truths they are being feed.
S

pinkeye said:
Well, perhaps you are Shell. Victoria is now Covid-19 free for days. You ae saying the same thing would have happened if NO limitations applied, OR...
Click to expand...

YES I AM! Because this is NOT our first rodeo. I mean no disrespect to the elderly, or any of the other victims of this virus. But I don't like people who parrot, and spew out a biased one-sided version of this crisis. I don't like people who say, "Man fell out of plane, but leave out that the plane was on the ground. Or that, "3 twisters hit our nation's capital today, causing minor damages.", but leave out that the twisters were only 2 meters high, and the damage was a blown over trash bin. These people are just being intellectually dishonest.

This is the kind of half-truth headline reporting, that is designed to get your attention, not to give the complete truth. The truth does not always have the same impact on the media ratings, as does its sensationalized version. It is our responsibility to tell the whole truth. Otherwise we no better than the masters pulling the strings.
You must log in or register to reply here.
Share:
Facebook Twitter Reddit Pinterest Tumblr WhatsApp Email Link
Top
Rules and regulations